Fake euro notes can be detected quickly and accurately with a spectroscopic technique. 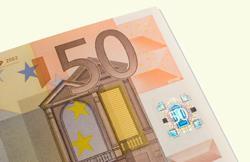 Europol, the EU’s criminal investigation bureau, claims that forgeries of euro paper currency are less common than those of national currency forerunners. Nevertheless, the European Central Bank confiscated 579 000 counterfeit notes - mostly €20 and €50 - in 2005 out of a total of 10.4 billion notes in circulation.

The ECB has issued look-and-feel guidelines for spotting fakes, and various hand-held devices are available that use UV or visible light for detection. Now, Jose Garcia and colleagues at the University of Barcelona have developed a rigorous but fast technique based on attenuated total reflectance-Fourier transform infrared spectroscopy microscopy (ATR-FTIR), as part of a broader study on fake artistic prints.

Garcia’s team and the Spanish police examined genuine €50 and €100 notes printed in several eurozone countries and compared their spectra with those of seized fakes. They recorded the IR spectra from small areas (200?m2) of the hologram and three other sections with different colours and designs.

All four areas of the authentic notes showed a unique and distinctive spectrum that was independent of the value of the currency and varied only slightly with the country of origin. The spectra of the counterfeits were strikingly different and varied very little between areas on the note or across denominations.

’The spectrum from a single place [on the note] is enough to detect a fake and this will take less than two minutes,’ Garcia told Chemistry World. ’The other places confirm the results.’