A new theoretical study by scientists in India claims to provide overwhelming evidence that the simplest carbon compound, diatomic carbon (C2), has a quadruple bond. The researchers propose that their findings could be experimentally verified. Unsurprisingly for such a contentious field, some experts in the field remain unconvinced.

‘Some problems never die out. The nature of chemical bonding in a carbon dimer, and in particular, since carbon has four valence electrons, the possibility of using them all to form a quadruple bond with another carbon atom has elicited much discussion recently,’ comments quantum chemist Jesus Ugalde from the University of the Basque Country, Spain, who was not involved in the work.

Molecular orbital and valence bond theory approaches have generally provided conflicting results regarding the bond order of C2, with the former usually predicting a double bond and the latter a quadruple bond. Now, Debashree Ghosh, Ankan Paul and graduate student Ishita Bhattacharjee from the Indian Association for the Cultivation of Science have taken a new molecular orbital theory-based approach to unpicking the bond. Ghosh says the methods they use in their study are not new, but ‘the way we are using it is what we believe is extremely novel’. 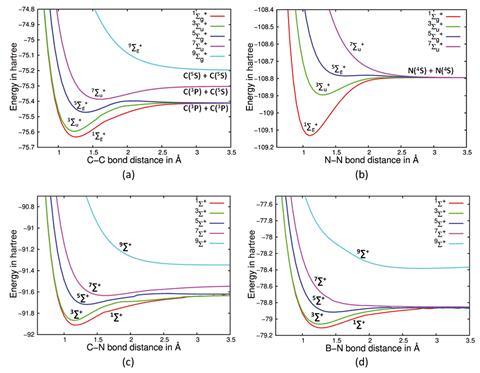 Source: © Debashree Ghosh/Indian Association for the Cultivation of Science

Ghosh, Paul and Bhattacharjee analysed the potential energy curves of low-lying high-spin sigma states of C2, as well as other dimers such as N2, CN+ and acetylene. Finding a deep minimum in the septet state of C2, they say, is evidence of a latent quadruple bond, and opens a window for experimental verification. ‘All other approaches will give you a certain number that is not an eigenvalue per se, and that’s why it’s not an observable. And if it’s not an observable, it will never be captured in an experiment,’ explains Paul. ‘The only sticking point here would be you will actually have to excite this molecule to that high spin state and it has to be somewhat stable to at least experimentally probe it,’ says Ghosh.

‘The C2 molecule is known to be very unstable, but we did find the quadruple bond signature in another species, the CN+,’ says Paul. He explains that since scientists have recently isolated CN+ in an ion trap it increases the chances of studying its excited electronic spectrum. ‘We are hopeful that there will be some experiments which may unfold this facet of bonding in C2.’

The team propose that they can establish the number of bonds in the ground state for second row dimers by ascertaining the value of spin symmetry that yields a purely dissociative potential energy curve. ‘They rely on the venerable concept of a chemical bond as a spin-paired electron-pair in a molecular orbital shared by two nuclei, which goes back to Lewis’ seminal contributions made more than a century ago. Then, by gradually spin unpairing electron-pairs they argue that they eliminate one bond at a time. This is made by calculating higher spin states. The one that results in a pure dissociative potential energy curve should correspond to “no bonding”, thus the number of steps made to achieve such a purely dissociative potential energy curve can be associated to the number of bonds,’ says Ugalde.

This appears at the nonet spin symmetry for C2 (compared with the septet spin symmetry for N2 and acetylene), which they attribute to a higher number of bonds between the two atoms in C2. The team believe their results provide strong evidence for a quadruple bond in C2, with two σ and two π bonds.

Physical chemist Marco Nascimento, from the Federal University of Rio de Janeiro, Brazil, has reservations about the approach: ‘How useful can the concept of chemical structure be if in order to define it for the ground state of a molecule one has to examine excited states of this same molecule?’

‘We do understand the apprehension that one might have in interpreting the ground state bonding scenario from the perspective of excited state potential energy curves,’ says Paul. ‘The idea may become less alien if we consider E–Z isomerisation in alkenes, which is achieved with ease when done photochemically. We develop a better appreciation for the double bonding between the two carbon atoms in the ground state when we focus on the fact that it prevents facile isomerisation in the ground state as opposed to effortless isomerisation due to free rotation around a single bond in the excited triplet state. In essence, our approach builds on this simple understanding of multiple bonding to comprehend the complex scenario in C2. It is also not a coincidence that spectroscopy of multiply bonded species is more rich compared to molecules with single bonds as excited states are essentially constructs of ground state bonding.’

Source: © Debashree Ghosh/Indian Association for the Cultivation of Science

‘This is a laudable contribution to the conundrum of calculating bond orders,’ says Ugalde. ‘However, this is not the same as inspecting the orbitals of the lowest spin state and deciding whether they correspond to bonding, antibonding or non-bonding interactions. The wave functions, and therefore the orbitals, are optimised for the particular spin state, and consequently differ from one spin state with respect to any other … We have not yet told the last word regarding the definitive answer to this problem.’

‘The change in spin states will change the orbitals to a certain extent,’ responds Paul. ‘Notwithstanding this issue, when the criteria suggested in the work is applied to a series of second period dimers it conforms with conventional bond orders and at the same time for C2 it predicts a quadruple bond. However, we do acknowledge the strength of this idea has to be tested on several systems along with other existing ones to check the robustness of it.’