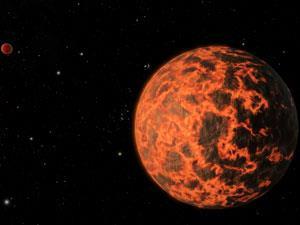 Scientists in the US and Canada have uncovered what could be the most detailed spectrum of an exoplanet to date. The spectrum reveals the presence of carbon monoxide and water, which suggest that the planet formed by core accretion.

Astronomers have detected some 3000 exoplanets since searches began in the late 1980s. Most of these have been spotted by looking for the dimming of a parent star as an exoplanet passes in front, or for a 'wobble' in a star caused by an exoplanet’s gravitional field. Both of these methods can reveal the orbits and masses of the exoplanets, and to some extent radii and composition. To get a proper look at an exoplanet’s atmospheric composition, however, a direct image is essential.

The first direct images of exoplanets came in 2008, but good atmospheric spectra have nonetheless been difficult to come by. Typically the range of light wavelengths detected is very narrow, or the resolution very poor. This has made it tricky for specific atmospheric constituents to be identified.

Now, astrophysicist Quinn Konopacky at the University of Toronto and colleagues have identified chemical constituents in an exoplanet atmosphere, namely carbon monoxide and water in the atmosphere of HR 8799c, which orbits the young star HR 8799, 130 light years from our Sun. To perform the feat, the researchers used two technologies on the Keck telescopes, based in Hawaii, US: an adaptive optics system, which helps to reduce the obfuscating blur of our own atmosphere, and OSIRIS, an instrument that combines normal images with spectra to help remove the glare of a parent star from an exoplanet’s own light.

The identification of spectral lines for carbon monoxide and water in HR 8799c meant that Konopacky and colleagues were able to measure the relative amounts of carbon and oxygen in the exoplanet’s atmosphere. The researchers discovered that the ratio of carbon to oxygen was different to that of the host star, which, they say, is consistent with a model of planet formation known as core accretion. In this model, which is thought to fit planets in our Solar System, material orbiting a star gradually packs together until it is massive enough to attract a gaseous atmosphere. In another model, known as disk instability, planets form almost instantaneously as a small portion of a gas disk orbiting a star collapses in on itself.

‘The main story here is that we have entered an era in which we can study the atmospheres of Solar System-like giant planets around other stars, just in the way planetary scientists have been able for decades to study our own Jupiter, Saturn, Uranus and Neptune,’ says Lynne Hillenbrand, who is based at Caltech, US, and a member of Project 1640. ‘And just like our own planets, those around other stars will have their own stories to tell.’