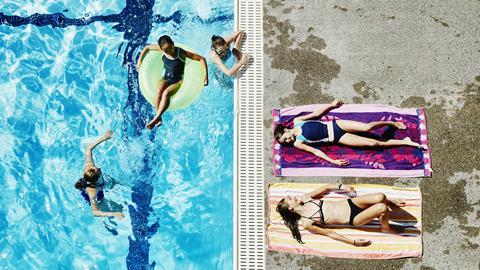 Explainer: The chemistry that keeps swimming pools clean and safe

It’s the middle of summer with record high temperatures throughout Europe, the US and elsewhere, and people everywhere are turning to outdoor swimming pools for respite. We take it for granted that somebody somewhere is monitoring and balancing chemicals so that the whole experience is pleasant and safe, rarely thinking about the chemistry protecting us.

Why does pool water need to be chemically treated?

Pathogenic microorganisms – including bacteria like Escherichia coli or Salmonella and viruses – end up in swimming pool water, often introduced by swimmers themselves. Disinfectants are required to kill these pathogens, and a chlorine-based disinfectant – sodium hypochlorite (NaOCl) or bleach – is the most commonly used and effective of these compounds. When sodium hypochlorite dissolves in water, it forms a weak acid, known as hypochlorous acid, which is a powerful microbicidal agent and active against bacteria, viruses, algae and fungi.

Hypochlorous acid is produced by our body’s white blood cells as part of a range of chemicals used to keep infection at bay. As hypochlorous acid is a powerful oxidant it can destroy pathogens by disrupting cell membranes and breaking down proteins.

A clean pool will have clear water, though it often appears blue because of how light and water interact. Maintaining the correct pH in a swimming pool is important too, as the ability of free chlorine (the combined levels of hypochlorous acid and its hypochlorite ion, OCl-) to kill microorganisms drops as the pool’s pH becomes more basic, while pool corrosion and eye irritation are more likely when the pH is more acidic. The optimal pH for pool water is around 7.4. The US Centers for Disease Control and Prevention (CDC) recommends a pH of between 7.2 and 7.8, and a free chlorine concentration of at least 1ppm in swimming pools.

The odour of swimming pools has become synonymous with chlorine. However, this is a misconception. The ‘pool smell’ that evokes all of those summer and vacation memories is not chlorine, it’s actually chloramines, which are derivatives of ammonia that build up in improperly treated pool water. Chloramines are formed during a reaction between hypochlorite and nitrogen compounds in contaminants like sweat, oils and urine from swimmers.

Chloramines can form in various ways in swimming pools. One of the simplest is the reaction of ammonia-like compounds, such as urea from swimmers, with hypochlorous acid. This leads to the formation of mono-, di- and trichloramines.

These toxic chloramines then evaporate, producing the odour that people associate with a clean, or even over-chlorinated, pool. It is counterintuitive that this familiar odour actually indicates that disinfection of the pool is not working properly, and that more chlorine is needed to get rid of those chloramines and keep it sanitary.

Trichloramine (NCl3) is a toxic, explosive and smelly chloramine created by the reaction of nitrogen compounds in the water with hypochlorous acid. The compound was first synthesised in the early 19th century by the French physicist and chemist Pierre Louis Dulong. He quickly learned that it was explosive, after losing an eye and two fingers, chemists Simon Cotton and Laura Finney recount. Soon after Dulong’s discovery, UK scientists Humphry Davy and Michael Faraday sustained temporary eye and permanent finger damage, respectively, when they tried to repeat Dulong’s work. Fortunately, trichloramine is not explosive in solution, but does add to swimming pools’ distinctive smell.

Why does pool water change colour?

Urban myths that colour-changing chemicals are added to public swimming pools and react with body fluids like urine or blood can be safely dismissed. Another spurious, but often repeated, claim is that chlorine will turn blonde hair green. It is the case, however, that some algaecides used in pools contain copper, which can turn light locks verdant. The hypochlorite oxidises the copper in the water and it then binds to the proteins in hair, which can lead to a green tint. To help prevent this, a leave-in conditioner can be applied to the head prior to swimming, and hair should be washed immediately after leaving the pool.

This recalls the incident at the 2016 summer Olympics in Rio de Janeiro, Brazil when the water in the diving pool turned an alarming emerald hue, with this then also happening in another of the Rio Olympic pools. At first the very public and embarrassing incident was blamed on algae caused by heat and insufficient wind. However, an investigation ultimately revealed that excess hydrogen peroxide – reportedly on the order of 160 litres – had been added to the water. This inactivated the hypochlorite, allowing algae to grow. Organisers stressed that the green water posed no danger to the swimmers competing for medals, yet the pools were nevertheless drained and the water replaced.

They can be. There were more than 4500 emergency department visits every year in the US between 2008 and 2017, as a result of pool chemical injuries, according to CDC data. About two-thirds of these incidents occurred during the summer swimming season, which runs from late May through to early September in the northern hemisphere. The CDC’s review of the 13,000 emergency room trips caused by pool chemicals between 2015 and 2017 showed that the most frequent injuries were due to inhaling chemical fumes, vapours or gases; not keeping the chemicals out of the hands of children and teenagers; and adding chemicals to the water just before swimmers enter. Over 3700 of these injuries were diagnosed as dermatitis or conjunctivitis, and nearly 2600 were chemical burns. No deaths were reported.

The CDC does, however, recount a chlorine gas incident that occurred at a public outdoor pool in upstate New York in 2018. This was caused when concentrated hypochlorite and an acid were mixed because chemical feeders did not automatically turn off following a power outage that had shut down the recirculation pump. People in the pool suffered from blisters, nausea and vomiting.

Acid and bleach (hypochlorite) should never be mixed as the reaction liberates chlorine. Accidents where cleaning agents have been mixed have killed people in the past.

How can we stay safe?

To prevent pool chemical injuries, the CDC says disinfection products must be kept below 35°C and in manufacturer-recommended conditions – such as low humidity and away from direct sunlight – and individual chemicals should be stored separately to prevent mixing. In addition, these substances must be protected from moisture, which can cause unwanted chemical reactions and release dangerous gases. The CDC also recommends installing an alarm to alert users if a pool’s recirculation pump shuts down, as well as a device that automatically deactivates the chemical feed pumps when there is no or low flow in the recirculation system.