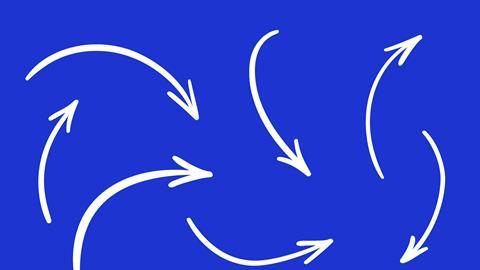 Explainer: why are curly arrows used in organic chemistry?

It’s been 100 years since curly, also known as curved, arrows first showed up in the scientific literature. Since then, they have made friends and foes, and gone from a novelty to an organic chemistry staple. While for the longest time, arrows were no more than a shorthand with no grounding in reality, evidence has started to emerge that the electron movement the arrows depict have an actual, real-life basis in quantum mechanics.

Today, seasoned chemists still push arrows around structures without much thought. The idea is that it allows creativity in rationalising mechanisms and reactions. But with textbooks still disagreeing on the best way to draw curly arrows, they remain one of the concepts chemistry students often struggle with.

What are curly arrows?

They are a shorthand for rationalising what happens during a reaction. Mostly used in organic chemistry, they illustrate which bonds are broken and formed, or how charges are distributed around molecules through resonance.

Perhaps counterintuitively, the arrows don’t illustrate movement of individual atoms but rather electron density movement – which indirectly implies how the atoms move. The arrow’s tail sits at the source of electron density (like a bond or a radical electron) while the arrowhead points towards where this density is moving to. Double-barbed arrows are the most common as they designate electron pairs such as σ or π bonds or lone pairs. Trajectories of single electrons, for example in radicals, are shown with single-barbed arrows.

Who came up with the concept and why?

The first scientific papers containing curly arrows were published in 1922 – one by Robert Robinson and William Kermack, and another by Arthur Lapworth. Both used arrows to illustrate why reactions gave certain products rather than random permutations of the substrates’ constituent atoms. 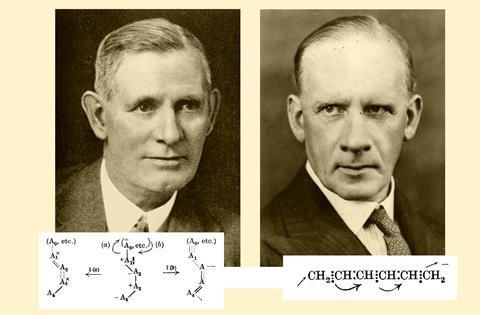 In the 1920s, organic chemistry was still in its infancy. Researchers were just starting to come to terms with molecular shapes, double bonds and mechanisms. Robinson and Kermack were working on the hot topic of their time: aromatics and polyenes. They wanted to answer the question why butadiene, when mixed with bromine, only produces 1,2- and 1,4-dibromo products rather than a mixture of all possible regioisomers. The way electrons hop between adjacent carbon atoms dictates which ones will connect to the bromine atoms. The duo illustrated this idea by drawing curly arrows in a way that’s surprisingly close to how chemists still use them today.

Curly arrows were helpful in building up a picture of why butadiene bromination produces only two regioisomers, rather than all possible ones

Robinson’s friend Lapworth went down a slightly different route. He was developing his concept of induced alternate polarities to explain why cyanide plus ketones make cyanohydrins. He had recognised that the negatively charged cyanide attacks the carbonyl carbon atom because its neighbouring oxygen gives it a positive polarity. The carbons next to the carbonyl carbon would then be negative and the next hydrogen positive – an alternating chain of polarities. In his paper, Lapworth was using arrows to push around so-called partial valencies, of which covalent bonds were assumed to have three. But partial valencies eventually fell out of fashion and so too did Lapworth’s curly arrows.

How did curly arrows become so popular?

Neither Robinson and Kermack’s nor Lapworth’s paper makes any mention of the arrow as a concept in itself. The arrows are almost an aside to the main point of understanding how chemical change occurs, which was the hot topic of the 1920s. It was, in fact, so fiercely debated that the UK’s Society of Chemical Industry refused to publish any more correspondence on the subject for some time.

But over the next few years, curly arrows and electron pushing won over many chemists, including Robinson’s arch-rival Christopher Ingold. The two of them were life-long enemies as both claimed recognition for laying the foundation of mechanistic thinking.

In the mid-1920s, Ingold started using curly arrows to explain resonance effects, substitution and elimination reactions. He didn’t credit Robinson and Kermack’s work – a fact Robinson remained bitter about for the rest of his life. In 1931, Ingold published a study on directing groups in aromatic nitration, together with Lapworth. The paper contains no curly arrows.

How have curly arrows evolved over the last century?

There was a bit of early confusion around whether arrows depict single or paired electron movement. But by 1926, Robinson was using curly arrows in a way that would be very recognisable to today’s chemists. But for the next few decades, using arrows to explain reaction mechanisms would remain in the realm of specialist papers written by experts. This started to change in the 1960s as curly arrows made their way into textbooks. Initially, they were often used incorrectly or with a lot of hesitation with one book stating that the arrows in a nucleophilic substitution ‘do not imply anything about the detailed mechanism, which may be very complex’.

The general notation for curly arrows has remained relatively unchanged over the last century: put the arrow’s tail at the electron density source and the head pointing to where it’s going. But that’s often where the similarities end. Because there aren’t any Iupac rules for curly arrows, almost every chemist has a slightly different approach to drawing curly arrows. Even undergraduate textbooks disagree on the best way to draw arrows. Can you have an arrowhead dangle in empty space? Or how about locating the arrow tail on an atom rather than a bond?

It’s not surprising that many chemistry students find the arrows to be confusing and illogical. Curly arrows should be a tool that allows chemists to creatively approach unfamiliar reactions. But students often find them so inscrutable that they feel they have no choice but to memorise them.

Are there alternatives to curly arrow?

Not really. There are, however, ways to draw curly arrows that remove ambiguities. These alternatives have been shown to make them more useful for those learning about the concept.

One of the big shortcomings of traditional curly arrows, no matter which way they’re drawn, is that they don’t say anything about regioselectivity – the preference for one arrangement over another following bond formation or breaking. For example, the addition of hydrogen bromide to propene follows Markovnikov’s rule, giving the most stable (secondary) carbocation intermediate and thus producing 2-bromopropane. For experienced chemists, the regiochemistry is implied by the arrows – but not so for beginners.

In 2009, Suzanne Ruder and colleagues from Virginia Commonwealth University, US, came up with the bouncing arrows that solve this problem. Like conventional arrows, their tail sits at the site of electron density, like a bond. But with an additional curved flourish the arrow ‘bounces’ off the atom to which the new bond is formed before heading to its destination. This, Ruder suggests, is particularly useful for depicting regiochemistry in electrophilic additions, electrophilic aromatic substitutions and carbocation rearrangements.

Another approach is the site-specific curly arrow, a development described in 2015 by Richard Vaughan Williams’s team from the University of Idaho, US. Williams attributes this way of drawing arrows to Robert Woodward, who championed curly arrows of all kinds after he started using them in the 1940s. Here, the arrow runs through the atom to which the new bond is formed. This is shown to work in reactions such as nucleophilic substitutions, electrophilic aromatic substitutions, cyclisations, rearrangements and Grignard reactions.

Kind of. For the longest time, they were no more than a mental shortcut with no grounding in what’s really happening during a reaction. But more recently, evidence has started to emerge that there is a direct connection between quantum chemistry and the electron movement as described by arrows.

In 2015, Gerald Knizia and co-workers at Penn State University, US, discovered that changes in intrinsic bond orbitals during nucleophilic attacks or Claisen rearrangements directly correspond to what is shown by curly arrows. And three years later, a team led by Timothy Schmidt from Australia’s UNSW Sydney showed for the first time that ab initio calculated wavefunctions in substitutions, additions and Diels–Alder reactions move exactly like curly arrows would suggest.

Acknowledgements: Thank you to Kristy Turner for helpful discussions.