Chemists in the US have developed a new technique to indentify individual nano-objects via their molecular structure. The technique, which involves bombarding the nano-objects with single clusters of gold atoms, could be used to sort nano-object mixtures or to probe beneath an object’s surface.

Techniques available to examine nano-objects include atomic force microscopy and scanning tunnelling microscopy, which accurately reveal the relief of the object’s surface. Others, such as secondary ion mass spectroscopy (SIMS), can reveal chemical information.

The normal practice in SIMS is to focus a beam of particles - say, carbon-60 ’buckyballs’ or atomic ions - onto the nano-object. The impacts cause the surface to eject debris, and by analysing that debris scientists can understand what the surface of the nano-object is made of. However, with the debris coming from many places on the surface all at once, it is only possible to determine a basic elemental composition, and not a more specific molecular composition.

Now, Emile Schweikert of Texas A&M University and colleagues have discovered a way to uncover a nano-object’s constituent molecules using SIMS. Rather than employ a beam of particles to bombard the objects, they use single ’nano-projectiles’ of 400 positively charged gold atoms with a total diameter of 2nm. To analyse the ejected debris, the researchers use a method called time of flight spectroscopy, in which the velocity, and hence mass, of a particle is calculated from the time it takes to reach a detector. By repeating the single bombardment many times over, the researchers can build up the distribution of the debris.

To test the new SIMS technique, Schweikert’s group created composite nano-objects consisting of 0.25?m-long alumina ’whiskers’ topped with 30nm-diameter polystyrene balls. They found that they could distinguish between the two materials - one that ejected alumina ions (the whiskers), and the other that ejected carbon and hydrocarbon ions (the polystyrene). 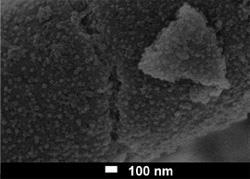 James Hannon, a researcher from IBM’s T J Watson Research Center in New York who has experience with SIMS, noted that the technique cannot identify a particular nano-object, because the resolution is not yet great enough to know exactly where the debris comes from. Nevertheless, he said that there is no reason why this could not be achieved. ’This paper demonstrates a potentially very useful extension of SIMS analysis that will help clarify the interpretation of SIMS from heterogeneous samples,’ he added. ’It allows chemical analysis of nano-scale volumes of a surface.’