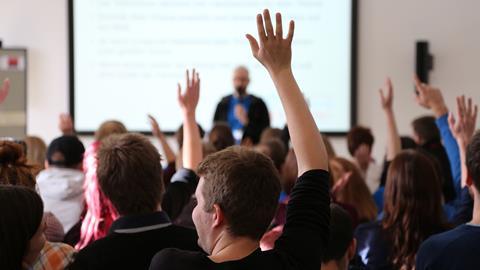 The beliefs of science, technology, engineering and maths (Stem) professors about the nature of intelligence significantly shapes student performance and dramatically affects racial achievement gaps in these fields, researchers at Indiana University have discovered.

The study, presented at the American Association for the Advancement of Science annual conference in Washington DC on 15 February, surveyed 150 undergraduate Stem faculty across various scientific disciplines – including chemistry – at a large unnamed public research university. The Indiana team also collected data on more than 15,000 students on the courses of these lecturers.

‘What we found was really striking,’ said Elizabeth Canning, the study’s first author. ‘When faculty endorsed more of a growth mindset, all students on average earned higher grades, and this was especially true for black, Hispanic, and Native American students.’ The racial achievement gap was cut almost in half when compared with classes taught by fixed mindset faculty.

Black, Latino and Native American students had a grade point average (GPA) that was 0.19 lower in fixed mindset classrooms compared to their white or Asian counterparts. In contrast, the disparity was 0.10 GPA points in growth mindset classrooms.

In addition, those taught by growth mindset faculty reported a better learning environment. They were more motivated to do their best work, and more likely to recommend the course and instructor. ‘This makes sense, because why would you want to engage in learning strategies that challenge you if your professor doesn’t think that you can improve,’ Canning said. She emphasised that the students did not perceive fixed mindset courses to be more difficult, rigorous or time-consuming.

The Stem faculty demographics in the new study mirror nationwide statistics, so the Indiana researchers anticipate that their results would hold true for other universities. Importantly, the study’s authors were careful to explain that being ‘fixed mindset’ has nothing to do with racism. They did not measure faculty beliefs about particular types of students, only whether they thought students could improve their intelligence.

‘We found some evidence that would mitigate against the racism or bias explanation,’ said principal investigator and senior author Mary Murphy. She noted that fixed mindset faculty were distributed evenly irrespective of gender, race or age.

Overall, the growth mindset professors were more likely to emphasise learning and development in their courses. This might mean encouraging students to ask questions, self-assess where they need to focus more attention and also work in study groups.

‘The findings are really pointing to effort, persistence and seeking help and those kinds of learning strategies as the pathway to success, whereas fixed faculty are really focusing more on innate, flawless performance,’ Murphy explained.

She emphasised that there is cause for optimism. ‘We know that faculty beliefs and behaviours are changeable – they are things that we can actually help shape through educational interventions,’ Murphy said. In fact, her team is already pilot testing faculty training programmes at different university campuses across the country.

This is the largest longitudinal field study of its kind ever conducted, but Murphy acknowledges that the findings need to be replicated.