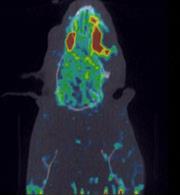 A palladium-containing fluorination reagent can be used to quickly synthesise aromatic molecules labelled with fluorine-18, a positron emitter used in molecular imaging. The electrophilic reactions catalysed by the palladium compound allow fluorination to be carried out at a late-stage in the synthesis of positron emission tomography (PET) tracers, reducing the loss of radioactivity before use. The unstable isotope, with a half life of just 110 minutes, is generated in a cyclotron by proton bombardment of water enriched with oxygen-18 and needs to be used in clinical settings as fast as possible.

PET is a non-invasive 3D imaging technology used in biomedicine and diagnostics. Incorporating a radionuclide tracer into a molecule, such as fluorodeoxyglucose (FDG), allows tissues to be imaged by PET, thanks to the gamma rays produced by the annihilation of positrons emitted by the radioactive fluorine.

Despite the widespread use of [18F]FDG, there is no general way to make many complex 18F compounds, simply because structural complexity makes it difficult to join the fluorine and carbon atoms. Other researchers have developed nucleophilic fluorination reactions that use a palladium-based catalyst to react aryl triflates with anhydrous caesium fluoride. In this reaction, carbon-fluorine bond formation proceeds through reductive elimination from palladium(II) aryl fluoride complexes.

The team has demonstrated that they can produce 18F-labelled small molecules within five minutes with the insertion of the radionuclide occurring in the final stages of the process. This ensures a high level of 18F radioactivity in the molecule immediately prior to clinical use.

’The strength of the method is that it can be applied in scenarios where no labelling method with 18F currently exists,’ Hooker tells Chemistry World. ’This method can directly "plug in" to current infrastructure and the palladium-precursors are a very insignificant fraction of the cost.’ After purification, only 5ppb of residual palladium are present, which is well below international recommendations for clinical applications.

V?ronique Gouverneur, at the University of Oxford, UK, whose team also works on novel approaches to fluorinated PET tracers, says: ’This is very beautiful work providing an original solution to a long standing problem in 18F-radiochemistry.’ She points out that the use of such a smart complex for direct fluorination is a significant advance. ’The complex is prepared from 18F-fluoride, allowing the production of high specific activity radiotracers.’