Ferroelectrics without the twist

Japanese chemists have developed a new ferroelectric material based on small hydrogen-bonded molecular crystals of croconic acid. The material has superior electronic performance and functions at high temperatures, so could pave the way for new, easily processed materials for use in electronics.

Ferroelectric materials have a spontaneous electrical polarisation, which can be reversed by applying an electric field. This makes them useful for electronic components such as capacitors. Most commercial ferroelectrics are inorganic ceramics of the perovskite family such as barium titanate (BaTiO3) and lead zirconate titanate (Pb{ZrxTi1-x}O3; PZT).

However, Sachio Horiuchi from the National Institute of Advanced Industrial Science and Technology (AIST) in Tsukuba explains that ferroelectric polymers and organic molecular materials are highly desirable - they can be soluble in organic solvents, amenable to low temperature fabrication techniques like inkjet printing, and avoid use of toxic and expensive heavy metals.

Horiuchi explains that the main obstacle to developing such organic ferroelectrics has been getting sufficiently high polarisation, which can be switched using a low voltage applied field, and maintaining the ferroelectric properties at useful working temperatures. ’Some polymer materials can operate at high temperatures, but they require a very high voltage for operation and have low spontaneous polarisation,’ he points out, ’or they have good polarisation but only work at very low temperatures.’

The team found that crystals of croconic acid - a five-membered carbon ring with an oxygen atom attached each carbon - had high polarisation density (comparable to BaTiO3), requires only a low operating voltage and retains its ferroelectricity up to 130?C. 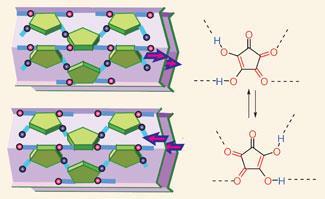 Hydrogens (balls) hop between oxygen atoms of croconic acid molecules (hexagons) within hydrogen bonds (in blue), changing the arrangement of double bonds and switching the polarisation of the material

One reason for this is the way the ferroelectric effect is produced, which involves movement of atoms or ions. In ionic perovskite materials, the metal ions move relative to the coordinating anions to create the polarisation, and in ferroelectric polymers, the polymer chains have to physically twist around. ’In the hydrogen-bonded croconic acid crystal, hydrogens simply hop between two oxygen atoms within a hydrogen bond,’ says Horiuchi, ’moving a small hydrogen atom within a hydrogen bond needs a very low voltage compared to rotating bulk polymer molecules.’

Steve Ducharme from the University of Nebraska-Lincoln in the US says that the operating temperature of the team’s material is remarkable. However, he points out that the polarisation switching time is relatively slow - about a second compared to a few nanoseconds for perovskites and some polymer materials. ’For some applications that is adequate, but for others like computer memory it’s a bit slow, but there doesn’t appear to be any fundamental reason why it couldn’t be made faster.’

Horiuchi admits that croconic acid itself is not really stable enough to be used directly in devices, but is a stepping stone to new research into organic ferroelectric materials. ’Ferroelectricity is not a familiar issue for most organic materials chemists,’ he adds, ’I hope that these findings will accelerate development of related materials.’