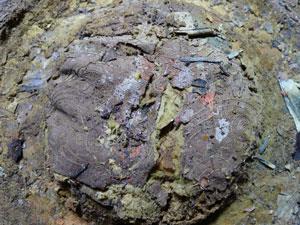 Ancient silk textiles are incredibly delicate, so care needs to be taken when they are excavated

Chinese researchers have found a way to restore and strengthen ancient, fragile silk fabrics using an enzyme-mediated reaction to fill in tiny cracks in the fibres. The team says the work could offer a new conservation technique that avoids using synthetic polymers, which can be toxic and damage silk textiles over time.

Silk is a natural protein fibre and was first turned into a fabric in ancient China. Some of the oldest silk textiles unearthed date to around 3500BC and are extremely delicate. Synthetic polymers and adhesives are widely used to restore such ancient artefacts because of their good mechanical and bonding qualities.

However, adhesives are chemically incompatible with silk and can damage the fabric over the long-term. One idea is to replace synthetic polymers with protein solutions and cross-linking agents. But again, improper cross-linking agents will eventually cause damage.

Zhanyun Zhu and colleagues at the University of Science and Technology of China, Hefei, have developed a transglutaminase-mediated protein polymerisation method. This uses a biopolymer chemically similar to silk as a filler, to reinforce historic silk fabrics without harmful agents. The process itself forms the necessary cross-links to increase protein stability.

'Due to their rarity and irregular shape, genuine historic silk fabrics were not appropriate for a large number of repeated tests,' Zhu says. 'Instead, artificially aged silk samples were used as substitutes for the restoration experiments. When the experimental conditions were ripe, we applied this on historic silk.'

Zhu’s restorer makes use of a transglutaminase enzyme (TG2). Ordinarily this forms links between glutamine and lysine amino acids either within a protein or between separate proteins. However, TG2 alone has no effect on silk because there are no glutamine residues. So the team used sodium caseinate as a glutamine donor, allowing the TG2 to form biopolymers to fill in the cracks in the silk fibres.

'It does seem a very useful and novel application to use the enzyme to restore ancient silks,' comments Philip Bonner a transglutaminase expert at Nottingham Trent University, UK. However, he is not sure the process is necessarily transglutaminase-mediated.

'It could be that the casein is binding non-covalently to the silk and acting as a filling agent. The elevated temperatures (50°C for 3 hours) used in the process would normally quickly denature animal TG2 but may help in the non-covalent binding of casein to the silk. This does not detract from the improvements noted but they may have to conduct additional work to prove that it is TG2 mediated.'

Regardless of the mechanism, the team suggest that demonstrations on silk samples can convince conservators to use the method on fragile silk textiles and possibly other materials. 'This method has the potential to be used to reinforce other protein relics, for instance, wool, hair, leather and parchment,' Zhu adds.