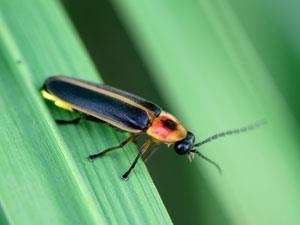 Korean researchers have taken inspiration from the highly efficient bioluminescent lighting system of the firefly to create an anti-reflective lens for light-emitting diodes (LED). This lens could help to manufacture more efficient and cheaper high-power LED lighting and display systems.

It was known that the firefly's lantern – the organ that generates light for sexual communication – comprises a luminous layer, a nanostructured cuticle and a dorsal layer that allow for highly efficient generation of bioluminescent light. But how the dorsal and cuticle layers work in this photonic system were not well understood.

While there has been much recent research into mimicking biological photonic nanostructures, including those found in the compound eyes of insects or Morphobutterfly'swings, for imaging or display applications, such work has mainly focused on how these nanostructures deal with incoming light as opposed to bioluminescent light generated internally by some organisms.

Now, Jae-Jun Kim and colleagues at Ki-Hun Jeong's lab at the Korea Advanced Institute of Science and Technology, have examined the intricate nanostructure of the firefly's lantern cuticle and created an artificial version for use as a high-power LED lens. They say their work is the first example of mimicking a bioluminescent organ for lighting applications.

The team determined the nanostructure of the lantern's cuticle using a scanning electron microscope and numerical analysis. Further spectroscopic experiments revealed the highly ordered structure reduces optical impedance between air and the cuticle, effectively acting as an anti-reflective layer to reduce loss of light and increase efficiency.

They did this by preparing polydimethylsiloxane lens nano-templates etched with different nanostructures and then recast these with a UV-curable optical resin to produce several lenses. Light transmission through the various LED lenses was measured with an integrating sphere with a LED light source and a fiber-coupled spectrometer.

'This contribution elegantly shows that by thoroughly investigating a biological system and then using the latest developments in nanoscale processing significant performance gains can be made,' says Steve Dunn, who investigates nanomaterials at Queen Mary, University of London, UK. 'The application of a nanostructured reflecting surface to enhance light emission from an LED is a striking example of how, using the latest technology, we are able to mimic some of the oldest technologies exhibited by plants and animals.’

The team's results show a significant increase in the transmission of LED light, which is comparable to a conventional anti-reflective coating of magnesium fluoride. 'The bioinspired LED lenses can be utilised for many high power LED applications, such as liquid crystal display backlight units, mobile camera phone flashes, automotive, domestic and medical lighting,' says Kim.

What's more, conventional polymer lenses for LEDs are made by injection molding and then adding an antireflective coating with sputtering. However, this two-step process is expensive. Kim explains that their method could produce an anti-reflective plastic lens with just a single step injection molding process, thereby driving down the cost of efficient LEDs.

However, Kim acknowledges there are challenges ahead. 'Our LED lens was made using a polyurethane based optical resin,’ he explains. ‘If the optical resin is heated to a high temperature, the color of resin turns yellow which can reduce the light transmission.’

'The author's have done a great job in translating the optical impedance by matching properties of the nanostructured surface observed in the firefly lantern to the encapsulation lens for an LED,' says Peter Reece, an optoelectronics expert at the University of New South Wales, Australia. 'The far greater challenge is to improve the light extraction efficiency at the semiconductor chip level where refractive index mismatch is much higher and optical losses are greater; it would be interesting if a similar bio-inspired approach would help here as well.'