Reactive intermediates in chemical reactions are, virtually by definition, hard to study. Unless you trap them in some inert matrix at very low temperatures and probe them with some gentle and typically indirect means, they’re usually gone in a flash. But a team at IBM’s research laboratories in Ruschlikon, near Zurich in Switzerland, has been able to take a single-molecule snapshot of such an intermediate in a common class of organic reactions, simply by binding the flat molecules to a solid surface and using a specially prepared atomic force microscope (AFM) to reveal the stick-like molecular framework.1 By measuring the bond lengths, they are able to deduce the chemical nature of this otherwise ephemeral species. 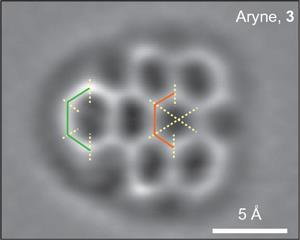 The aryne has a double bonded ‘cumulene-esque’ structure, rather than that of a triple bonded alkyne

Leo Gross and co-workers at IBM have previously shown that an AFM in which a single molecule – usually carbon monoxide – is attached to the needle-like probe tip, which reveals the topography of a surface or of molecules attached to it, can produce incredibly detailed images in which individual bonds can be seen. Their images of planar organic molecules such as pentacene2 look almost like textbook stick diagrams, bringing the molecular world into unprecedented focus. The IBM team has now teamed up with chemist Diego Peña and colleagues at the University of Santiago de Compostela in Spain to take the method to the next level: watching chemical reactions between individual molecules as they unfold.

The two groups previously collaborated when Gross and colleagues imaged a graphene fragment prepared by the Spanish team.3 That reaction was thought to involve an intermediate called an aryne: a benzene-like ring from which two hydrogens are removed, usually shown as containing a triple bond – a benzyne. When the groups came together again recently at a meeting, Peña suggested that the technique might be able to ‘see’ the intermediate too. ‘We and many others been using arynes for decades to prepare complex molecules,’ he says. ‘So we were very interest in finding conclusive – and visual – experimental evidence that these molecules truly exist.’ 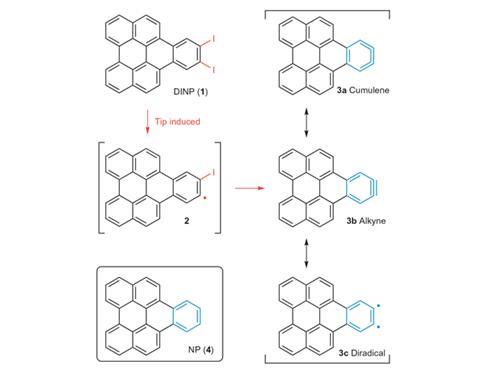 The chemical transformation favoured the cumulene form of the aryne

To do so, they chose a simple way of making arynes: to pluck off two iodine atoms from a benzene ring. This can be done selectively for single molecules by using the tip of a scanning tunnelling microscope, charged to a high voltage, to break the bonds. The team prepared polycyclic molecules containing a di-iodobenzene group and adsorbed them onto an inert surface – ultrathin films of sodium chloride on copper – in a vacuum at temperatures of 5K. They imaged the molecules first with the iodines attached and then after they had been removed.

The aryne ring, distorted from a regular hexagon because of its different bond orders around the ring, was clearly visible. And from the lengths of these bonds, the researchers could calculate that the bonding in the aryne intermediate was not actually an alkyne-like triple bond but predominantly ‘cumulene-like’, with three consecutive double bonds. Previous studies of aryne intermediates had given conflicting results about these and other possible bonding patterns.

‘This is the most relevant experimental evidence to date that directly bears on the issue of aryne structure,’ says organic chemist Thomas Hoye of the University of Minnesota, US, who has used aryne reactions extensively for synthesis. ‘A priori, there is no reason to think that this observation is not more generally applicable to the structures of the majority of arynes.’ He suspects that the findings may also hold for arynes at ambient temperatures in solution, which is how they’re usually encountered in synthetic reactions.

The fact that the molecules are planar makes them particularly easy to image, but Gross doesn’t see this as essential. ‘We don’t think planarity is important for the creation of reactive intermediates,’ he says. ‘In fact, for fusing molecules on the surface it might be important to move out of the surface plane and use less planar molecules. We are working on that at the moment.’

‘Our hope now is to use these or other reactive intermediates to trigger chemical synthesis by the tip of the microscope,’ Gross adds. ‘This could allow the fabrication of graphene nanoribbons with customised shapes by atomic manipulation.’

What other reaction mechanisms and intermediates might be studied this way? ‘The list is vast,’ says Pena. ‘If I open an organic chemistry manual randomly, I have trouble finding a chemical challenge that could not be address in this way. I think high-resolution AFM will be to chemistry what high-resolution telescopes are for astronomy.’

Michael Crommie of the University of California at Berkeley, US, who has used similar methods to image molecules at high resolution, agrees. ‘I think that this new imaging technique is a game-changer, as it gives us so much chemical information that we never had access to before,’ he says. ‘I think it’s going to really help us to better understand chemistry on surfaces at atomic length scales, and to control the molecular nanostructures we fabricate at a level we never could achieve in the past.’