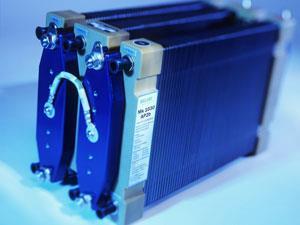 Many chemists are familiar with the concept of a synthetic proton-transporting membrane, such as Nafion, which are widely used in various electrochemical devices such as sensors, batteries and electrolysis units. Now, a team at Simon Fraser University, British Columbia, Canada, has developed a polymer based on benzimidazolium hydroxide that can transport the hydroxyl ion and yet does not degrade quickly as other alkaline-transport membranes have done.

Prior computer simulation had suggested that the mesityl compound would be crowded and stable, whereas the C2 carbon atom in the phenyl-substituted analogue would be exposed, rendering the uncrowded polymer unstable. Fourier transform infrared (FTIR) spectroscopy and NMR confirmed that the former is indeed far less susceptible to degradation than the latter.

The team also reports a method for converting the resulting water-soluble materials into insoluble membranes through cross-linking which occurs when excess potassium hydroxide is washed away and the negatively charged benzimidazolide and positively charged benzimidazolium rings can interact ionically. The materials might have novel applications in fuel cell technology and in other electrode devices, as well as leading the way to other related materials with properties tailored to specific uses.

The team has carried out preliminary tested on non-optimised membrane samples and found the conductivity to be about nine to 13 millisiemens per centimetre. This, the team says, is close to the typical values obtained for hydrated membranes, such as quaternary ammonium-substituted poly(aryl ether sulfone) and commercial Nafion-based anion-exchange membranes. They suggest that optimising the blend will nudge the conductivity values higher.

‘A very nice piece of science. The stability of the materials is very impressive,’ says Geoffrey Coates of Cornell University, US. ‘These new polybenzimidazoles are very impressive in that they exhibit no degradation over a 10-day period in 2M KOH at 60°C. Given the hydroxide conductivities of the polymers, this represents a major achievement in robust hydroxide exchange membrane development.’