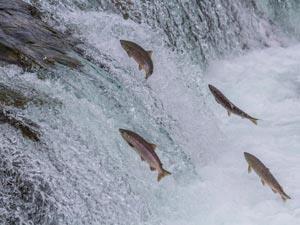 As strange as it sounds, fish sperm could be a key ingredient for extracting and recycling rare earth elements (REEs) from ore and materials such as magnets and electronic waste. The Japanese team developed a process that uses salmon sperm, or milt – a delicacy in Japan – to recover and separate REEs in aqueous solution, which could provide a green and cheap alternative to existing chemical extraction methods.

This isn’t the first time fish sperm – or rather the DNA contained within – has been used in unusual ways. Among the strangest are fireproof coatings and templates for mass producing silver nanoparticles.

There’s been growing interest in replacing environmentally damaging metal-extraction methods with more eco-friendly ones, including bio-mining using bacteria, hydrometallurgy instead of pyrometallurgy for the recovery of metals and even using simple sugars to extract gold.

The team led by Yoshio Takahashi at the University of Tokyo and other Japanese institutions were originally studying the adsorption of REEs on bacterial cell surfaces and observed that the phosphate site plays a crucial role in binding metal ions. This prompted them to consider DNA, which also has a phosphate site, to extract REEs in water.

However, since DNA is soluble it would have to be fixed to a solid substrate such as cellulose. Conversely, milt is solid and insoluble. It’s also cheap, with thousands of tonnes of it being discarded by the Japanese fishing industry every year.

To test out salmon milt’s REE adsorption capabilities, the team created a milt powder and a solution containing neodymium, dysprosium and trivalent iron – the main metals used in neodymium magnets, as well as other reference solutions. When the milt power was added to the solutions, they discovered that metal ions had a high affinity for phosphate in the powder. The REEs were subsequently recovered from the milt powder using acid and centrifugation.

‘The idea of relying on cheap salmon milt to adsorb and separate rare earth elements from iron in scrap magnets is quite interesting and, although the proposed protocol does not suppress dissolving the magnets in strong acid, it deserves attention,’ says Jean-Claude Bünzli, who investigates REEs at the Swiss Federal Institute of Technology, Lausanne. He adds that it could be problematic scaling-up recovery of REEs using this technique, but that it might prove useful in removing REEs present in alloys, such as in electronic circuits, mobile phones and hard disk drives.

Takahashi acknowledges that since REE recovery from scrap magnets is not big business, the salmon-milt process might be better suited for extracting and recycling other elements on a large scale. The team has not yet shown the process works with other elements, but Takahashi is confident that it will because of salmon milt’s high ion-exchange capacity.