In organic chemistry, carbon atoms bonded to four other groups are almost invariably tetrahedral, unless they can be sterically forced into other shapes. However, as Stephen Liddle from the University of Nottingham explains, swapping organic groups for alkali metals like lithium stabilises the square planar configuration.

This is not a new idea, Liddle admits, it was shown theoretically in the 1970s by Paul von Schleyer (now at the University of Georgia in Athens, US), and several groups have since made molecules that could be described as containing planar four-coordinate carbons. But Liddle points out that all of these examples are based on cis Li-C-Li arrangements, where the two Li atoms are 90? apart, and the majority aggregate as dimers, which can make interpreting their bonding somewhat ambiguous. 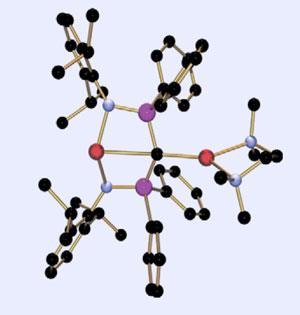 ’What’s special about this compound is that it’s monomeric,’ says Liddle, ’so there’s no question of which lithium atoms belong with which carbon.’ He adds that the lithium atoms are also unusually trans related across the carbon centre. However, Liddle recognises that the structure is far from being a ’perfect’ planar carbon, and adds that the group used computational model calculations to convince themselves that both lithium atoms were really interacting with the carbon atom. ’When it comes to the nature of the bonding, like most things in reality it’s not black and white,’ Liddle notes.

Robert Mulvey, an expert in organolithium chemistry from the University of Strathclyde, UK, praises the simplicity of the discovery - particularly the team’s use of N,N,N’,N’-tetramethylethylenediamine (TMEDA) to both boost the strength of their lithium base and discourage the final complex from aggregating. ’This breakthrough will appeal to experimentalists and theoreticians alike,’ adds Mulvey, ’and will no doubt stimulate more activity in the pursuit of novel organometallic structures.’