Flawless quasicrystals may be possible to synthesise simply 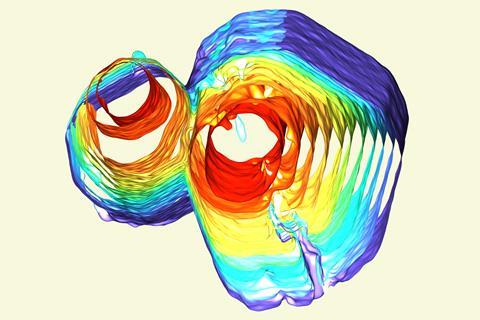 Quasicrystals can grow together without forming a grain boundary provided their lattices are directionally well-aligned, US scientists have discovered. The researchers hope that their work could help quasicrystals to finally realise their full potential, more than 25 years after their discovery.

In a perfect crystal, the atoms are arranged in ordered, periodic unit cells. This periodicity inevitably introduces planes of weakness into the structure. In 1984, however, Dan Shechtman of the Israel Institute of Technology and colleagues discovered quasicrystals in which the atoms formed elaborate ordered arrangements that never repeat themselves. These materials, whose discovery won Shechtman the 2011 chemistry Nobel prize, should have the hardness of crystalline materials, but no planes of weakness. Quasicrystals have found some uses in scalpels, for example.

Unfortunately, perfect quasicrystals are extremely hard to produce. When crystals form, multiple grains nucleate from different seeds and grow outwards until they meet. If the spacing between the seeds does not match the periodicity of the crystal lattice, a grain boundary forms as the lattices do not match. Grain boundaries can increase the risk of fracture and corrosion. Engineers therefore grow crystals on substrates to ensure that grains seed with the ideal periodicity and stitch together into a perfect crystal. The problem in quasicrystals, explains materials scientist Ashwin Shahani of the University of Michigan, Ann Arbor, is that there is no lattice periodicity. ‘Two quasicrystals will always be incommensurate with each other, and you would naturally expect to form a grain boundary,’ he says. This means large quasicrystals are brittle and chemically unstable.

Shahani and colleagues were studying the formation of quasicrystals using x-ray tomography when they noticed something unexpected. ‘In this experiment, the nucleation rate was very high, thereby increasing the probability that quasicrystals would impinge on one another during growth,’ he says. The researchers were surprised to see that, when two quasicrystals that were closely aligned met, they often coalesced rather than forming a grain boundary.

To understand what was happening, the researchers consulted computational chemist Sharon Glotzer, also at the University of Michigan. Molecular dynamics simulations indicated that, when the two quasicrystals were misaligned by less than about 10˚, the two grains could rotate into perfect alignment, with the residual lattice strain being dissipated through the lattice by phasons – quasiparticles not present in perfect crystal lattices. When the misalignment was greater than 10˚, however, a grain boundary would form. ‘As experimentalists, we can now use these insights in synthesis, and specifically in sintering, whereby we deliberately introduce quasicrystals with low misorientation, thereby promoting the formation of a single crystal at the end,’ says Shahani.

‘I think it’s a good paper,’ says theoretical physicist Michael Widom of Carnegie Mellon University in Pennsylvania. ‘I don’t know whether it’s a stunning breakthrough because the experiment sees one thing and then the simulations are done to interpret the experiment. The experiment doesn’t directly prove the things that the simulations have shown, but it’s novel, it’s not been done for quasicrystals before to my knowledge, and it’s interesting.’ He suggests future work could focus on finding out whether the density of grain boundaries really does jump sharply at or near 10˚ – which should be observable using electron microscopy.