Flexible lighting is on a roll 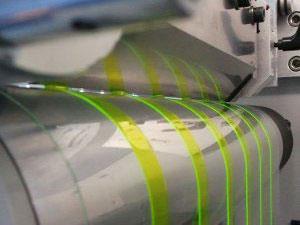 Researchers in Sweden and Denmark have made flexible light emitting sheets using an efficient roll to roll printing method akin to newspaper printing. The work shows how green and cheap light emitting devices might be made for future applications such as illuminated panels, smart packaging and e-paper.

Organic light emitting diodes (OLEDs) are widely used for digital displays in televisions and other devices, but for large scale applications they remain prohibitively expensive. They are made with several materials that are layered in very thin films but a cheap and efficient fabrication method entirely under ambient conditions has remained elusive, partly because some of these materials react with oxygen and water.

Now, researchers at Umeå University, Sweden, and the Technical University of Denmark, Roskilde, have shown that light emitting electrochemical cells (LECs) could provide an alternative to OLEDs for large scale applications by developing a solution-based roll-to-roll printing method to fabricate LEC sheets under ambient conditions.

‘An important goal of all technologies is to be easy and cheap to fabricate. If you can make it using roll-to-roll, you’ve succeeded,’ says Andreas Sandström at Umeå University. ‘This revolution has not reached light emitting devices yet, but we hope that our study will be the first step.’

LECs need three layers to work in an efficient way: two electrodes that supply electric power and one active layer that transforms the electricity into light. The team created their LEC sheets using a flexible poly(ethylene terephthalate) (PET) substrate. Using a slot-die roll coater, the substrate was roll-coated with a 14nm ZnO nanoparticle layer on indium tin oxide to create the cathode. The active ink layer, comprising a mixture of an organic solvent, a yellow light emitting polymer and an electrolyte, was then deposited onto the cathode. Finally, the anode ink was deposited on top of the active layer. The final device is just 150µm thick with the active light emitting layer 1µm thick, with the rest down to the PET foil that provides mechanical stability.

Roll-to-roll fabrication is an extremely efficient production method and has already been used by the Danish side of the team to produce organic solar cells. 'Our research demonstrates that light emitting sheets could be produced in this manner too,' says Sandström.  'This will allow for large scale production at a very low cost. We might very well see light in places we’ve never seen light before such as wallpapers, packaging, and clothing,' he speculates.

‘In my view, the LEC technology paired with the method of processing it under ambient conditions, pave the way to ultra low-cost lighting and customisable signage solutions,’ says Sebastian Reineke who investigates light emitting devices at the Dresden University of Technology, Germany. 'The whole process looks so simple that I think, not so far from now, we will be able to use our home inkjet printer to produce the same kind of amazing things.’