Synthetic chemists from the US have developed a new strategy for decorating cyclobutanes with complex stereochemistry to turn them into highly functionalised molecules and natural products.1

The inherent ring strain in cyclobutanes, which gives them their unique reactivity, makes forming the four membered ring system difficult. Yet, their usefulness as intermediates in organic synthesis and the presence of the motif in many natural products and pharmaceuticals spurs method development forward.

Back in 2016, Sarah Reisman, and her team at the California University of Technology, US, devised a synthesis for the cytotoxic natural product (+)-psiguadial B.2 Central to this synthesis was an enantioenriched cyclobutane bearing an 8-aminoquinolinamide group, which the team made in three steps from commercially available starting materials via a tandem Wolff rearrangement and asymmetric ketene addition. ‘We discovered that the chemistry we developed to synthesise psiguadial B could be more generally useful to make other cyclobutane compounds,’ explains Reisman.

Reisman’s team has now devised a modular approach to modify starting cyclobutanes at two different positions while still controlling the stereochemistry. It alters the starting material in a sequential fashion; adding an aryl group to the structure using a C–H functionalisation reaction, with the 8-aminoquinolinamid group acting as a directing group, and then hydrolysing the 8-aminoquinolinamid group to obtain a carboxylic acid. Reisman’s team has shown they can transform the carboxylic acid to an aldehyde, alcohol or ketone and investigated how it can be used in several decarboxylative cross-coupling processes. To illustrate the concept, the group successfully synthesised the natural product (+)-rumphellaone A – which has previously been found to inhibit growth of leukaemia cells – in only nine steps.

Commonly, synthetic chemists make cyclobutane frameworks with good control over the relative stereochemistry via [2+2] cycloaddition reactions. ‘But with the cycloaddition approach, every time you want to change a substituent you have to optimise another cycloaddition, always having to form the cyclobutane in a step that introduces the diversity,’ Reisman explains. ‘Our method is more modular and it gives flexibility, but it is a trade-off. We thought it might be interesting to people who are involved in natural product synthesis or making fragments for drug design.’ 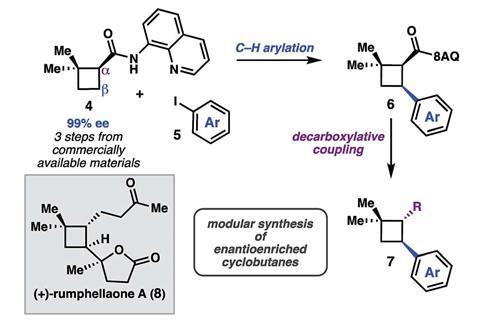 Organic chemist Thomas Stevenson of FMC Agricultural Solutions, US, says Reisman’s concise enantioselective synthesis of (+)-rumphellaone is noteworthy for several reasons. ‘Her team completed an impressive exemplification of the key arylation of the cyclobutane in preparation for the total synthesis, which makes a variety of cyclobutanes readily available, substituted with common rings of interest to medicinal and agrochemical chemists.

‘Just as remarkable is her use of new C–C bond forming reactions based on carboxylic acids, which have only recently become available in the literature, to complete the synthesis,’ Stevenson adds. ‘Taken together the work of the team has made a diverse range of cyclobutanes accessible to practicing chemists through a practical and modular synthetic approach.’