Conventional chemistry is done in batches, using flasks or reaction vessels. Conversely, flow chemistry promises continuous production, with reactants and solvents being pumped through tubes or channels that can be heated or cooled to yield a steady stream of products. 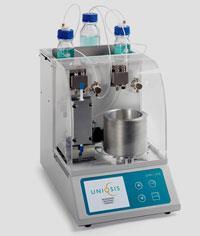 The buzz surrounding flow synthesis is due to its promise to make synthetic chemistry more efficient. ’I think of batch chemistry like making a cup of tea - a skilled, manual job with a variable output, and we know that some people make an awful cup of tea,’ said Mark Ladlow, a former colleague of flow synthesis pioneer Steve Ley of the University of Cambridge, UK. ’Flow synthesis is like an espresso machine - automated, reproducible, and fast.’

The attraction for the pharmaceutical industry is the ease with which reactions can be scaled up during the ’milligrams to kilograms’ stage of drug development. Manufacturing could also benefit, as highlighted by Novartis’ recent investment of $65 million (?32 million) for ten years of research into flow technology at the Massachusetts Institute of Technology, Cambridge.

Uniqsis used the symposium to launch their FlowSyn Continuous Flow Reactor. ’We want to sell the machine by selling the chemistry,’ Uniqsis CEO Martyn Fordham told scientists at the symposium. ’Chemists need to know when and where a flow tool is useful.’

The ?25,000 programmable device can pump two liquid reagents through a precisely heated coil, or a reagent through a column of immobilised solid reagent. It’s just the latest of several flow systems to hit the market around this price point, said Chris Smith, who works for Ley.

Smith pointed out that flow chemistry can also decrease on product purification - the reagent’s residence time in the coil or column is short, so there is little time for by-products to form. And thanks to the high pressure pumps, superheated reactions are also possible, since solvents can be heated far beyond their normal boiling point.

The downside of flow reactions is the potential for leaks or blockages. ’If you don’t exercise, you can end up with blocked arteries and a heart attack,’ said Uniqsis’s Otman Benali. ’The same thing can happen with flow chemistry if you don’t do things the right way.’