Researchers in Austria and Spain have collaborated to develop a solvent-free continuous flow synthesis for a key chiral intermediate of the antidepressant drug (–)-paroxetine. The process employs robust catalysts and intensified flow conditions to generate this compound on a multigram per hour scale.

Paroxetine, commonly marketed as Paxil and Seroxat, is a selective serotonin reuptake inhibitor. Most routes to make it require the chiral intermediate – ((3S,4R)-4-(4-fluorophenyl)piperidin-3-yl)methanol – which is easily converted into the active pharmaceutical ingredient by etherification and removing a protecting group. Conventional synthetic methods to make this intermediate involve many reaction steps and multiple rounds of work-up and purification, and the necessary asymmetry is introduced by means such as chiral auxiliaries. Catalytic enantioselective transformations can generate paroxetine, however these routes are impractical for manufacturing due to the low productivity of the key asymmetric step. 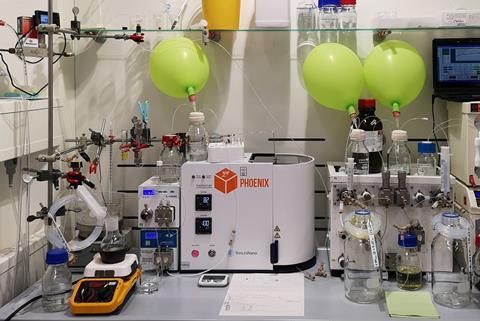 Now, Oliver Kappe at the University of Graz and colleagues have demonstrated how to make this key chiral intermediate using a continuous flow process. The process is much more productive than earlier batch methods as the key chiral intermediate can be made on a multigram per hour scale in a highly chemo- and stereoselective reaction. Additionally, the process generates a minimal amount of waste as it is virtually solvent-free. ‘We instead use part of the reagent as a solvent, which can later be distilled off and recycled,’ Kappe explains.

‘This is a brilliant example of how the smart combination of continuous flow, organocatalysis and synthetic chemistry knowledge results in a more sustainable and productive process,’ comments Itziar Peñafiel, who studies biotransformations under continuous flow at the Manchester Institute of Biotechnology in the UK.

The critical step of the process is a solvent-free organocatalytic conjugate addition between 4-fluorocinnamaldehyde and dimethyl malonate, using a remarkably stable organocatalyst. ‘Normally when you deal with metal catalysts in flow, you may see leaching, degradation or inactivation of the catalyst,’ says Kappe. ‘Here, the organocatalyst is bound to a resin so it cannot leach and degradation is minimal.’ This addition step yields a chiral aldehyde, which a telescoped reductive amination–lactamisation–amide/ester reduction sequence transforms into the key intermediate. Notably, the reduction step is achieved using neat borane dimethylsulfide as the reducing agent, which is only safe from the risks of thermal decomposition, or forming diborane and hydrogen, when used under flow conditions.

The synthetic strategy relies on the enantioselective asymmetric conjugate addition between 4-fluorocinnamaldehyde and dimethyl malonate to yield a chiral aldehyde that can subsequently be converted into a phenylpiperidinone via a three-step cascade involving imine formation, reduction and lactamisation, to finally provide key intermediate 1 by reducing the amide and ester moieties

Jenny-Lee Panayides, a medicinal chemist at the Council for Scientific and Industrial Research in South Africa, says that this work ‘provides a refreshing look at where flow chemistry should be heading, as this approach is a clear demonstration of not only an elegant academic flow-based synthesis, but also an industrially viable route.’

For this method to progress to an industrial scale, however, Kappe says that further work is needed: ‘One challenge would be to make the synthesis of the immobilised organocatalyst more efficient, or find a cheaper route. This will open up the way to industrial implementation.’