Scientists in the US have discovered the presence of salty brine in a network of streaks that grow and fade with the seasons on the hilly terrain of Mars. The result may indicate that liquid water freely flows during warm seasons on the red planet.

Since the first observations of long dried-up ancient lakes on Mars in 2002, researchers have consistently found evidence of historical water flow on our planetary neighbour over the past decade. But there has been little direct evidence to indicate that water is still flowing across the Martian surface.

Using a visible–infrared spectrometer on board the Mars Reconnaissance Orbiter, Lujendra Ojha, from the Georgia Institute of Technology, and his colleagues have now detected magnesium perchlorate, magnesium chlorate and sodium perchlorate salts in the recurring slope lineae that decorate Mars during the warm season. They did not find the same spectral signatures emanating from the surrounding surface. 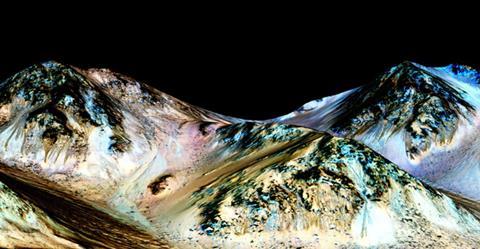 These dark, narrow, 100m long streaks may be evidence of contemporary flowing water on Mars

The salts are consistent with minerals that precipitate from water and indicate that salt hydration may be responsible for the appearance of these dark streaks. Ojha and his colleagues also argue that, as the wetting of perchlorate salts on Earth supports microbial growth, astronomers should analyse the Martian salts for signs of biological activity.