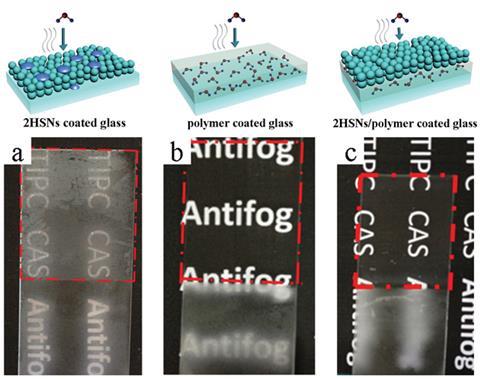 Scientists in China have built a thin film that retains its antifogging properties even under an antireflective coating.1

When water molecules in warm moist air condense on a cooler surface, tiny droplets form. On transparent surfaces – such as glasses, windows or screens – these droplets scatter light and fog the surface. Most antifogging materials are superhydrophilic compounds that spread the water molecules on the surface to stop droplets from forming and require the superhydrophilic layer to be on top. This imposes ‘significant difficulties and challenges when designing multifunctional thin films,’ explains Junhui He from the Chinese Academy of Sciences in Beijing. The problem is ‘that different functions generally act on their own and do not collaborate with each other. How to harmonise these functions in a single film is a big hurdle that scientists must span.’

He and coworkers recently designed a self-healing polymeric thin film inspired by the self-healing capabilities of DNA.2 The hygroscopic polymer rapidly absorbed water molecules and kept the film fog free by preventing microdroplets from forming. This mechanism gave He the idea to put the antifogging layer in the middle of the device and to add an outer layer with a different function. In this new study, He has coated their antifogging polymer with antireflective hollow silica nanoparticles (HSNs). The HSN pores are permeable to water molecules so retain the antifogging properties of the inner polymer layer.

Yi Du, a thin film expert from ExxonMobil, US, says ‘it is cool to see research progress like this – this surprising result is a good demonstration that two functionalities can be decoupled and applied sequentially.’ Katsuhiko Ariga, an expert in surface science from the International Centre for Material Nanoarchitectonics (MANA) at the National Institute for Materials Science in Japan, agrees: ‘This innovative concept can expand the possibilities of material design. We already have huge varieties in layering assemblies; deeper investigation with controlled layering structures will reveal the fundamental physical chemistry necessary for wider generalisation of He’s findings.’

He is already expanding on this research to improve the robustness and lifetimes of the films as well as designing films with sequential layers to include electrical conductivity, luminescent properties, and even antibacterial properties for applications in optical devices, optoelectonic materials or building materials.