Food additive may have given deadly bacterium its chance 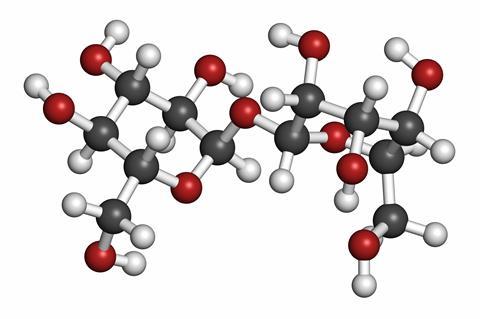 A food additive spurred on the development of virulent strains of the bacterium Clostridium difficile, new research suggests. Between 2001 and 2006, epidemic strains of the bacterium began infecting patients in the US, Canada and Europe, causing life-threatening gut inflammation and diarrhoea. This rise in dangerous C. difficile infections coincided with more and more of the sugar trehalose being added to foods.

Manufacturing innovation has cut the cost of trehalose production more than 100-fold, and the sugar was approved as a food additive at the turn of the century. Trehalose is an extremely stable sugar, resistant both to high temperatures and to acid hydrolysis thanks to the glycosidic bond linking its two glucose units. This makes it valuable for high temperature food processing, since it doesn’t lead to browning as part of the Maillard reaction.

The two epidemic C. difficile strains that emerged recently are RT027 and RT078. The study shows that they evolved two different ways to feed on low levels of trehalose indicating each strain was quite distinct from the other.

Usually, almost all trehalose is absorbed in the upper intestine, while C. difficile spores germinate in the lower. ‘At high concentrations, [trehalose] makes it farther down the intestinal tract,’ senior author Robert Britton explains. ‘Dietary trehalose would thus favour 027s and 078s over other ribotypes since they can grow on this sugar while others cannot.’

Britton says ‘the fact that two very different strains of not closely related C. difficile became epidemic at the same time as a sugar they can eat much better’ is not a coincidence. ‘Our data support that these two ribotypes increased in prevalence due to a change in the human diet.’

C. difficile contains an enzyme that can break the glycosidic bond in trehalose so that it can feed on the sugar. ‘This enzyme is repressed in most C. diff strains but a mutation in the trehalose repressor causes the 027 ribotype to express [the enzyme] at a much lower concentration of trehalose,’ notes Britton. ‘In 078s they have acquired a high affinity transporter for trehalose, which allows for growth on much lower concentrations of trehalose.’ 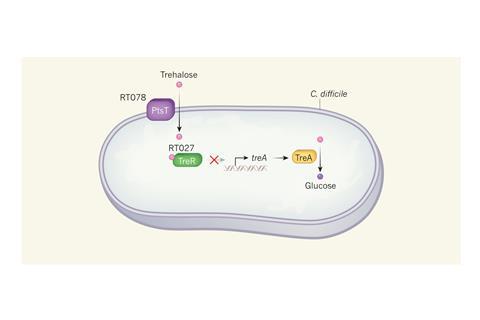 The RT078 strain of C. difficile has a transporter protein that lets it take up trehalose much faster than other strains

Experiments with humanised mice showed that metabolism of dietary trehalose made RT027 C. difficile infections worse. ‘We don’t know why metabolising trehalose causes C. difficile to be more virulent. We know they make more toxin but we haven’t figured out the mechanism yet,’ says Britton.

Britton suggests that hospitals with 027 or 078 outbreaks could consider eliminating trehalose in patients’ diets. Trehalose is found naturally in high amounts in some mushrooms and is added to foodstuffs such as pasta, ground beef and ice cream.

Trehalose ‘may be one part of the jigsaw explaining why these became more common’, comments microbiologist Mark Wilcox, lead on C. difficile for Public Health England. However, rarely will one attribute determine success and the association ‘does not explain why the more virulent types of C. difficile increased in countries at different times and then were successfully controlled in some of these [as happened in the UK]’. Use of certain antibiotics inactive against virulent C. difficile types may also have played a role, by damaging parts of the normal gut flora and providing an advantage for the resistant types, Wilcox adds.

Correction: The article was updated on 5 January 2018 to remove any link between sucrose and the Maillard reaction. Chemistry World regrets the error.