Former US Chemical Safety Board chairman won’t be prosecuted

Justice Department has dropped a perjury case against Rafael Moure-Eraso 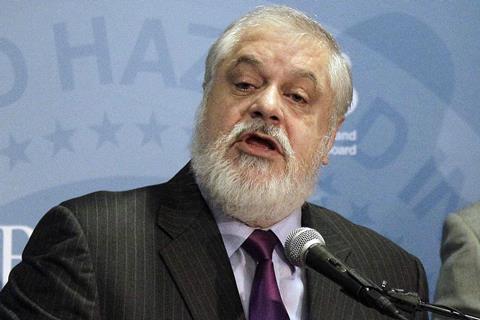 The former head of the Chemical Safety Board will not now face charges of perjury the Justice Department has decided. He maintains his innocence

The US Department of Justice decided almost a year ago not to prosecute the head of the nation’s Chemical Safety Board (CSB) for perjury, according to government documents obtained by E&E News.

Rafael Moure-Eraso led the CSB – the US agency charged with investigating chemical accidents – from June 2010 until March 2015, when he was under fire for alleged serious mismanagement. He purportedly lied during hearings convened by the House Oversight and Government Reform Committee in June 2014 and March 2015. At the time of the hearings in question, Moure-Eraso was facing growing congressional and White House pressure following allegations of mismanagement and misuse of private email, and other information the committee had received contradicted his testimony.

In July 2015, the Republican chairman of the oversight and government reform committee at the time and its top Democrat requested that then attorney general Loretta Lynch investigate whether Moure-Eraso committed perjury when testifying before Congress. That request went unanswered until shortly after Jeff Sessions became the new attorney general in February 2017. The case was recommended for closure the following month, and it was officially closed in April.

Moure-Eraso tells Chemistry World that he was ‘very surprised and saddened’ upon learning that his case was referred to the Department of Justice. ‘I was surprised as I testified completely and truthfully during my appearance before the oversight committee,’ says Moure-Eraso, who is now a professor emeritus at the University of Massachusetts in Lowell. He has been lecturing over the last year about process safety management at that university, and at others in Bangkok, Thailand and Colombia.

A source familiar with the CSB calls the charges against Moure-Eraso ‘really rather absurd’, and expresses surprise that it took this long for the case to be dropped. He was on the stand several hours, and the supposed lies told were ‘very minor discrepancies’, according to the source.

‘What is clear is that Moure-Eraso took a lot of controversial positions in favour of stricter regulations and adopting the European safety case model, and that engendered a lot of opposition from the chemical industry and some people in Congress,’ the source adds. He says that the CSB’s current administration, under chairwoman Vanessa Sutherland, has been less vocal on the need for new rules and focused on making recommendations following an accident. ‘It is a very pronounced change,’ the source notes.

Meanwhile, the CSB is still at the centre of a political battle. The Trump administration proposed defunding the $11 million (£8 million) agency in its last two budgets. At the same time, the CSB’s managing director, Daniel Horowitz, has been on paid administrative leave since June 2015 over accusations of mismanagement and leadership deficiencies.

Although President Trump has requested the elimination of the CSB once more, the board has again chosen to submit its own separate budget proposal. It is seeking $12.1 million for 2019 from Congress.