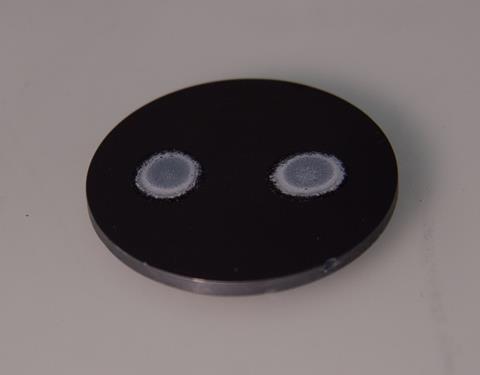 Two pools of DNA stored in the presence of calcium phosphate, giving the DNA added thermal stability. Each pool comprises 50µg of DNA, which in theory could store 11,000TB of digital information

Drying solid state DNA with three different inorganic salts could elevate the potential of using DNA to store data. Scientists in Switzerland and the US have shown that DNA stabilised by these salts stored 115kB of data that remained error-free even after accelerated aging.

‘New media are needed for data storage, and DNA is the perfect medium,’ says Emily Leproust, CEO and co-founder of Twist Bioscience, a US-based company that makes synthetic DNA, who was not involved in the study. Translating DNA into a physical data storage system, however, is challenging because preventing synthetic DNA from degrading usually requires extreme conditions. Aside from that, the DNA mass present in the system and therefore data storage density can be low.

Yet, it’s possible to sequence DNA from bone that is thousands of years old. ‘Fossil records show us there is a stability that gets added to DNA by being in bone. That’s the idea behind this research,’ says Robert Grass from the Swiss Federal Institute of Technology in Zurich, who led the study.

The mineral phase of bone is made from calcium phosphate so the team started by drying DNA in a calcium phosphate solution before moving onto calcium chloride and magnesium chloride. ‘It is more the calcium than the phosphate that’s responsible for the stability and we get even better stabilities when we use magnesium as the ion interacting with the DNA,’ says Grass.

The team tested the DNA storage potential of the salts by adding amplification primers to both ends of a single DNA strand encoding a 115kB image. After almost six days of accelerated aging at 70°C, the team used polymerase chain reactions to amplify the DNA strand for decoding. The salts were easily removable from the DNA due to their water solubility. An image from the salt-protected DNA was decoded without error whilst the unprotected DNA could not be read at all. ‘It’s the interaction between the calcium or magnesium ion and the phosphate backbone of the DNA that gives the stability we observe,’ explains Grass.

‘This study adds to the cutting edge research on long-term storage of DNA that has digital data encoded within it,’ adds Leproust.

The team will now investigate which DNA decay reactions the bone-inspired salts prevent or change.