Nanoframe structures increase activity 22-fold and are simple to produce 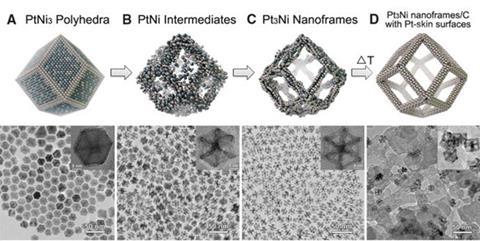 US scientists have created an exceptional fuel cell catalyst that contains far less platinum – conventional catalysts need 36 times more platinum to hit the same levels of activity. The manufacturing process, which was discovered by accident, uses simple techniques that the researchers believe can be easily scaled-up. The work could help to make fuel cells economically viable for applications such as cars as the precious metal makes up much of the cost of the cell.

Fuel cells react hydrogen with oxygen to produce water, using the electricity generated by the redox reaction to power a motor. The most effective catalyst is platinum, which is, unfortunately, extremely expensive and scarce. Chemists are searching for alternatives, such as doped carbon nanotubes, but at present commercial fuel cells usually use platinum.

Current designs usually use platinum nanoparticles in an inert porous carbon matrix, maximising the availability of the platinum to the reactants. In 2007, Vojislav Stamenkovic of Argonne National Laboratory, US, and colleagues demonstrated that alloying platinum with nickel to make Pt3Ni makes the surface much more active by modifying the electronic structure of the platinum. They did not know, however, how to produce Pt3Ni nanoparticles suitable for use in fuel cells.

The latest work came about when Peidong Yang's group at the University of California, Berkeley, was studying solid polyhedral PtNi3 nanoparticles. ‘My postdoc, Chen Chen, after he'd made all these nanoparticles, stored them in an open environment where air could dissolve in the solvent,’ says Yang. Two weeks later, he checked his sample using a transmission electron microscope and was surprised to find that they had turned into hollow nanoframes. Running the reaction at a higher temperature shortened this to 12 hours.

Subsequent analysis showed that the oxygen dissolving in the solvent had selectively etched the nickel, producing Pt3Ni. When thermally annealed the nanoframes' internal and external edges developed a highly active platinum skin. The hollow shape of the nanoparticles allowed reactants to access all edges, increasing activity 36-fold over current platinum–carbon catalysts.

They were also surprisingly robust. In the laboratory, they subjected the nanoframes to the electrical stresses and strains that they would receive if formulated in a fuel cell that was discharged 10,000 times and only saw a negligible loss of activity. In contrast, platinum–carbon catalysts lose around 40% of their activity during such a test as the platinum dissolves in the electrolyte. The simplicity of the manufacturing process should mean that the process could be readily scaled up to produce much more efficient fuel cells requiring far less platinum in the near future.

Radoslav Adzic, a fuel cell expert at Brookhaven National Laboratory in the US, wants to see the nanoframes in a real fuel cell to prove their industrial readiness as, if nickel were to leak out, it could ‘damage the fuel cell irreversibly’. He also believes that the time to produce the nanoframes still needs to be shortened to produce the catalyst industrially. Nevertheless, he says, ‘the catalyst's activity is excellent – probably the highest that has been achieved so far’.