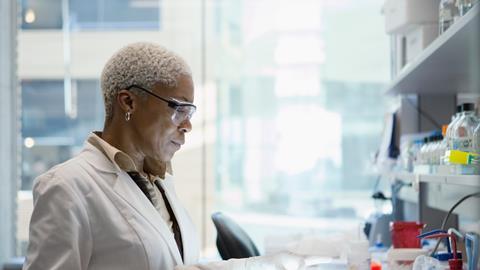 A study of the publications of almost 6 million researchers over 20 years suggests that men produce more papers than women, even after correcting for age. 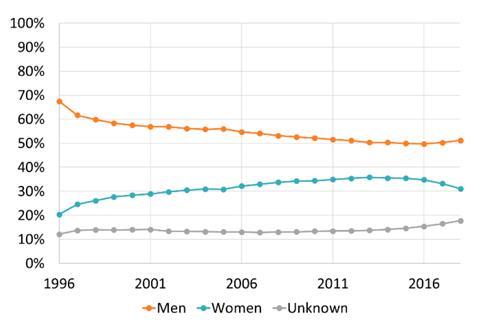 The authors, who’ve published their research as an as yet unpeer-reviewed preprint, based their analysis on the Scopus database and used an algorithmic approach to determine whether authors were men or women. They considered only authors that had at least three publications, and linked authors to discipline and to countries. China and India were excluded, however, because of the large number of researchers for whom it was difficult to determine whether they were men or women.

There were small differences in the numbers of men and women apparently ending their career (determined by them having no publications in the most recent years of the analysis), especially in the earliest stages of their career. ‘Our study rejects the idea of a leaky pipeline [as] women are almost as likely as men to stay in the system,’ says one of the authors, Ludo Waltman, deputy director of the Centre for Science and Technology Studies at Leiden University in the Netherlands.

The probability of a researcher ending his or her career appears to be highest for the youngest cohort of researchers – who started in 2010. Waltman says the authors discussed this finding extensively and suggest that one option ‘is the system itself, becoming increasingly competitive – [with an] increasingly large number of early career researchers but still a very limited number of positions for more senior researchers’. Alternatively, it could be an artefact of the methodology, because the authors couldn’t distinguish between young researchers who might publish again in the future and those who had left the system entirely.

While men were 20–35% more productive than women, regardless of the stage of their career, the study also suggests that men may reach senior positions more quickly than women. In both early and later stages of their career men were 15–30% more likely than women to be a last author – an indication of seniority.

‘I’m not 100% sure it’s telling us a great deal that we didn’t know before,’ suggests Rachel Oliver, professor of materials science at the University of Cambridge. ‘These types of data are only of any value if they then act as a call to action to create some form of change.’

‘[What] we turn our faces away from is that in this hyper-competitive environment – which is again evidenced in the paper – a little bias can go a very long way.’ Take a decision to scrutinise more carefully a woman’s paper which leads to its rejection or being held up, when a man’s paper goes ahead. ‘Even if the only time the bias was experienced was that one decision and that one paper – if that’s at the wrong moment, across a career that can make an enormous difference by the time those two people have been in the discipline for 25 years.’