DNA can be programmed to create nanoparticles of various shapes

DNA – it is the basis for life, the blueprint from which proteins are created. Now, researchers in the US and China have demonstrated that DNA can also be used as a blueprint for the creation of non-biological structures. Their ‘genetic code’ could pave the way for tailored nanoparticles – fit for use as catalysts, or in surface-enhanced Raman spectroscopy (SERS).

Scientists have used DNA as a template to guide nanoparticle assembly before. It is DNA’s programmability – the numerous different combinations of nucleotides – that makes it so adaptable. If DNA is added to nanoparticles, it binds selectively, forming links that stick the nanoparticles together into interesting structures. 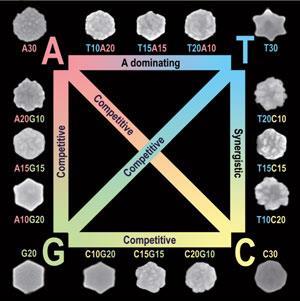 But until now, no one has systematically examined the effect of varying DNA sequences on these structures, says materials scientist Yi Lu at the University of Illinois at Urbana-Champaign. By doing this, Lu’s group, together with colleagues at Tsinghua University in Beijing, has come up with a ‘genetic code’ that governs the ultimate structure of metal nanoparticles – just like the biological genetic code governs the synthesis of proteins.

Lu’s group created their structures by incubating prism-shaped gold nanoparticles with different DNA sequences, and then adding a reducing agent, hydroxylamine, and a gold salt to initiate growth. They used scanning electron microscopy and transmission electron microscopy to study the final shapes.

The researchers discovered that each of the four nucleotides of DNA produced a very definite shape. With sequences containing only adenosine (A), the nanoparticles were round and rough; with thymine (T), they were six-pointed nano-stars; with cytosine (C), they were round and smooth; while with guanine (G) they were hexagonal. What’s more, combinations of two base types produced a mixture of both shapes. Sequences combining A and T units, for example, produced a more rounded star.

Lu says that nanoparticles templated by DNA could find use in catalysis, which depends very much on the precise shape of surfaces, and in surface-enhanced Raman spectroscopy, in which particles adsorbed onto surfaces boost the spectroscopic signals.

‘I consider this a breakthrough in nanobiotechnology,’ says Hao Yan, who specialises in DNA self-assembly at Arizona State University in Temple, US. It ‘reveals the possibility of discovering a rich set of genetic codes to control material synthesis. This is only the start of an exciting direction. Potentially, if one can use longer sequences, more rules will be discovered,’ he adds.

Dan Feldheim at the University of Colorado in Boulder, US, agrees. ‘I think the field is in its infancy, but it is exciting to think about creating a genomic … archive for materials, with sequence codes that could be manipulated endlessly to create new materials,’ he says.