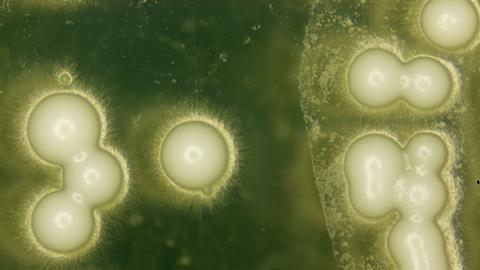 A strain of brewer’s yeast that feeds on sugar and produces cannabis-derived compounds has been engineered by researchers in the US, who used genes from the cannabis plant to alter the microbe’s metabolism.

The yeast converts the sugar galactose into compounds such as cannabidiol (CBD) – which is used to treat some forms of epilepsy – and the psychoactive chemical tetrahydrocannabinol (THC), as well as less well-known derivatives that may have interesting medicinal properties.

‘By engineering yeast we are able to produce very pure THC or CBD – much purer than what you get from plants,’ says Jay Keasling from the University of California, Berkeley, who led the research. He adds that, once scaled up, it should be significantly cheaper to make cannabinoids in this way compared with extracting them from cannabis grown in greenhouses or fields, or synthesising them chemically.

The team used more than a dozen genes from Cannabis sativa to recreate the entire biosynthesis pathway for a range of cannabinoids in yeast. The first stage of the process – conversion of galactose into olivetolic acid – was relatively straightforward to engineer, says Keasling, as it involves a pathway the team had already engineered when working on a yeast strain that produces the antimalarial drug artemisinin.

One of the biggest challenges was finding an appropriate gene for the next stage of the pathway, in which olivetolic acid is converted to cannabigerolic acid (CBGA), an important precursor to cannabinoids such as THC and CBD. 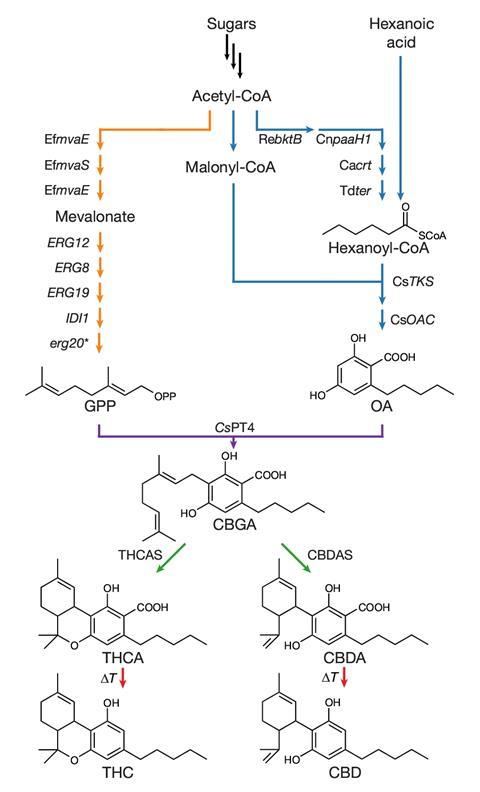 Engineered biosynthetic pathway for the synthesis of both cannabinoids

‘The enzyme that produces CBGA has been reported in the patent literature, but never in the scientific literature,’ Keasling explains. ‘We put it into yeast and it didn’t work, so we had to go back into the plant and look for the right gene.’ They searched for candidates in the genomes of C. sativa and another closely related plant, eventually discovering a cannabis enzyme that could do the job. ‘Once we found it, it worked really well in yeast,’ Keasling says.

After successfully producing CBGA, the researchers were able to add more enzymes to the pathway to convert it into cannabinoids and eventually to assemble all the steps into a single strain of yeast capable of turning sugar into THC and CBD. Although the quantities produced are low – just 8mg of THC per litre of yeast broth – Keasling says the process could be optimised and scaled-up. His spin-out company Demetrix aims to commercialise the technology, along with other yeast-based syntheses.

As well as producing well-known cannabinoids, Keasling’s team was able to coax the yeast into producing much rarer derivatives – including some which aren’t even made by cannabis plants – by feeding it fatty acids as well as sugars.

‘Because the enzymes are sloppy they will accept other acids and that allowed us to create a whole bunch of unnatural cannabinoids that have never been found before,’ says Keasling. ‘There could be a blockbuster drug in there… We can also produce all those rare cannabinoids that people know are there but they’ve never really had access to study them because they’re produced in such minute quantities.’

Vincent Martin, a bioengineer from Concordia University in Canada, says the engineered yeast will give researchers access to a ‘much greater diversity’ of cannabinoids. ‘We don’t know if this will translate to bioactive molecules, but at least now this space can be explored.’

As with yeast strains that synthesise opioid painkillers, including morphine, Keasling says there is little chance of the technology being adopted for the illegal production of cannabis compounds because of the precise laboratory conditions required to grow the yeast. ‘We could easily engineer a strain that would make it very difficult for an ordinary person to carry this out,’ he says.