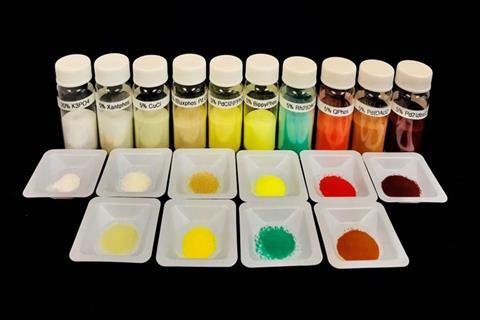 Glass beads coated in chemicals offer a simple and cheap way to overcome the problems of dispensing miniscule amounts of reagents needed for high-throughput screens. The new technique was developed by scientists at US biopharmaceutical AbbVie and it can be used to easily measure out milligrams of reagents with nothing more sophisticated than a plastic scoop.1

High-throughput reaction screening enables rapid testing of multiple reaction conditions both cheaply and quickly. However, engineering obstacles have slowed its uptake, such as the need to dispense tiny amounts of solid reagents accurately into each individual reaction well. Automated solid-handling robots struggle with accuracy when working with such tiny amounts. Sticky and statically-charged reagents are a problem. Stock solutions and slurries can be used, but again these don’t suit all solids.2

High-throughput chemists at AbbVie decided this problem needed a better, universal fix. The team had a hunch that the powder-coating concept already widely used by the pharmaceutical industry for making solids physically easier to handle might be the answer.

The team developed ChemBeads, readily-available glass beads coated in solid reagents. The ChemBeads behave just like the uncoated glass beads, regardless of their coating type, and dispensing robots can handle them with ease. The robots have now accurately dispensed over 300 different ChemBeads coated in chemicals including catalysts, ligands, inorganic bases and reactants.

The team uses an acoustic mixer to coat the beads – acoustic energy adheres the chemicals to their surface. The adhesion is due to mechanical forces, mostly van der Waals, meaning the chemicals rapidly leave the bead once a solvent is added. 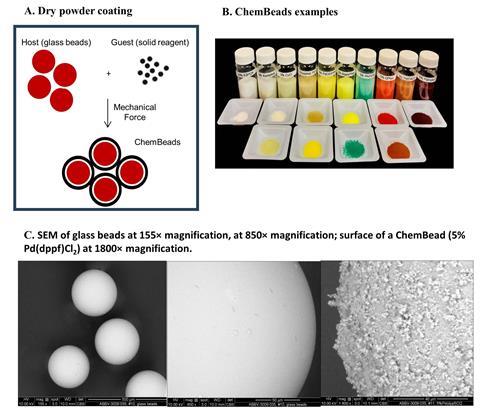 Team lead Yin Wang says the team found that the solid reagents make up 1–20% of a ChemBead’s mass, depending on reagent. For any reagent the variation in mass adhered was just plus or minus 10%.

So far the ChemBeads’ have proven themselves in more than 120 screens, with a greater than 85% success rate. The team report that a 0.5–1mg reaction scale provides the best balance in terms of material preservation, accuracy and simplicity of reaction setup. They have also successfully scaled-down to 1μg. Preliminary results also suggest that it is possible to coat more than one reagent on the same bead.

‘This technique provides a nice solution to the solid handling problem by diluting solid reagents on glass beads,’ says Michael Shevlin, a process R&D chemist at US pharmaceutical company Merck & Co. ‘One could imagine that common reagents might become commercially-available as coated beads,’ he adds.

For those without access to a solid-handling robot, Wang says ‘they can just use a scoop’ to dispense the coated beads. The team used a 3D printer to make calibrated scoops able to dispense between 5 and 200mg of ChemBeads. With a 1% mass loaded bead, a 5mg scoop can therefore dispense 0.05mg of a reagent.

‘Demonstrating accurate dispenses with scoops is a nice touch, because it makes this technique available to labs without the resources to purchase a solid-handling robot,’ Shevlin adds.