GM tomato is a factory for healthy nutrients 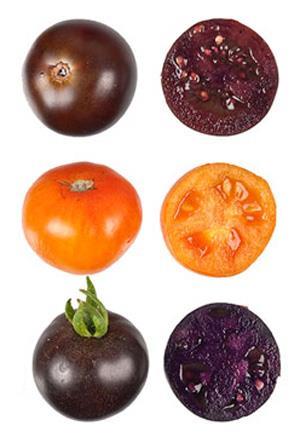 A variety of tomato that has been genetically engineered to produce large quantities of potentially health-boosting compounds – including flavanols and anthocyanins – has been developed by researchers in the UK.

A single tomato of the new variety contains the same amount of resveratrol as 50 bottles of red wine, or the same amount of genistein (a compound found in soy beans that is thought to have health benefits) as 2.5kg of tofu. As tomato plants grow quickly and produce a lot of fruit, farming this new variety could be a way to produce these nutrients in industrial quantities much more cheaply than synthesising them chemically, or extracting small amounts from other plant sources.

The variety was made by introducing a gene from the model plant Arabidopsis thaliana – called AtMYB12 – into the tomato genome.  The gene codes for a transcription factor that binds to the promoter regions of genes encoding various metabolic enzymes. ‘In Arabidopsis [the] MYB12 [transcription factor] regulates the production of flavonols … which are important in UV protection and signalling,’ says Cathie Martin, who led the study at the John Innes Centre in Norwich, UK.

When AtMYB12 is introduced into tomato plants, it switches on metabolic pathways that shift the plant’s energy and carbon pathways towards the production of flavonols and phenylpropanoids as the fruit develops. This causes these desirable metabolites to build up in the fruit. ‘As much as 10% of the carbon in the fruit can be flavonols,’ says Martin. ‘This high level accumulation is a special feature of AtMYB12 because it targets both primary and secondary metabolism and increases the supply of aromatic amino acid precursors as well as ATP and reducing power.’

By introducing additional plant genes – such as the enzymes necessary for the production of resveratrol in grapes – the plants can be engineered to produce specific compounds that are thought to have certain nutritional or health benefits. ‘The tomato is a wonderful production system. If metabolic engineering is targeted to the end of fruit development, the fruit can serve as a bag in which to accumulate natural products, without impacting yield,’ says Martin.

As well as being a good way to produce large quantities of the target nutrients, Martin says the tomatoes could potentially be sold for consumption down the line. ‘If the different compounds we have engineered in tomato can be shown to protect against chronic diseases in preclinical studies, we could consider applying for regulatory approval for commercial sales. This we are doing with high anthocyanin tomato juice which has well-proven protective effects.’

Martin adds that the AtMYB12 gene could also be engineered into other fruits, and potentially certain vegetables where the products could be accumulated in a storage organ such as a tuber. 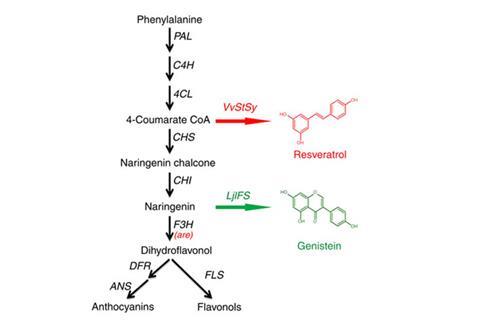 ‘This research gives us a better understanding of how healthy nutrients are genetically controlled in tomato, and maybe other fruits,’ comments Huw Jones, a senior research scientist at agricultural science institute Rothamsted Research. ‘It is a great example of how biotechnology could provide health benefits directly to consumers.’ He adds that the work ‘will further broaden the debate on GMOs in the EU’.

Martin agrees that boosting plants’ ability to produce compounds that are seen as healthy may help improve the public perception of genetically engineered food. ‘I think when consumers see a product which offers a benefit to them, and which could not be derived by natural breeding methods, they will understand much better the potential that biotech crops have to benefit society.’