The recurrence of prostate cancer could soon be spotted years earlier thanks to a new highly sensitive test developed by US and Austrian researchers. The team’s bio-barcode assay uses gold nanoparticles and DNA as amplification agents to detect prostate specific antigen (PSA), a protein associated with prostate cancer, and is 300 times more sensitive than other commercial assays, the researchers say.

Levels of PSA in patients who have had the prostate gland surgically removed typically drop to a level that is undetectable using conventional assays. If levels begin to creep up post-surgery, it can give physicians a warning that the cancer is returning - but only if they can detect this rise. With the new bio-barcode assay, PSA can be measured and monitored at much lower levels than current commercial immunoassays, and can therefore be used as a disease-marker.

The immunoassay is made of two components, a PSA antibody-functionalised gold nanoparticle decorated with DNA strands, and a magnetic microparticle functionalised with a second PSA antibody. In solution, these two particles both bind to PSA, sandwiching the protein between them. The sandwiched probes can then be magnetically separated thanks to the presence of the magnetic particle. The DNA that decorates the gold nanoparticles is then removed and detected using a scanometric assay, indicating how many sandwiched probes were formed and thus the level of PSA present in the sample. Hundreds of DNA strands are released for every molecule of PSA sandwiched in the assay, which helps boost the sensitivity of the test.

Chad Mirkin, who led the research at Northwestern University in Chicago, US, says this barcode assay was made possible by over a decade of work aimed at making polyvalent oligonucleotide nanoparticle conjugates. ’Our ability to make gold particles functionalised with DNA and proteins, where the precise number of proteins and DNA strands can be controlled, allows us to create systems capable of amplification in the context of biodetection assays.’ 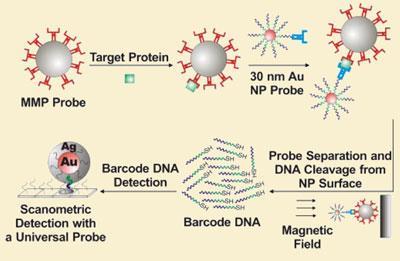 The team tested their new technique on samples from 18 post-surgery patients, and detected low levels of PSA which would probably have been missed using existing measures. ’It is the only tool out there that allows one to reliably measure PSA values in folks who have had their prostates removed,’ says Mirkin. ’We hope to be able to use it to differentiate those who will recur from those who are cured. For those who will recur, we may be able to determine recurrence years earlier than with conventional tests.’

’The bio-barcode technology is very interesting, and although these authors have focused on PSA, it holds promise for convenient, highly-sensitive and multiplexed assays for diverse proteins in the clinical laboratory,’ says Jay Bock, a chemical pathologist at Stony Brook University Medical Center in New York. ’There are many alternative approaches, but one using the power and versatility of nucleic acid technologies certainly seems appealing.’

According to Mirkin, the technology will be also useful in validating experimental therapies for prostate cancer because a person’s PSA levels can now be tracked in response to hormone, radiation and chemotherapy. However, Bock cautions that an extensive clinical trial is required to establish a compelling clinical application of high-sensitivity PSA assays.

But Mirkin reports that his team is in the process of a much larger study, involving 250 patients, to validate these early results. ’The technology works and it is robust.  I would be surprised if there is not a commercial assay available sometime in the next year, but that ultimately is a decision of the company [Nanosphere Inc.] that owns the technology,’ adds Mirkin.