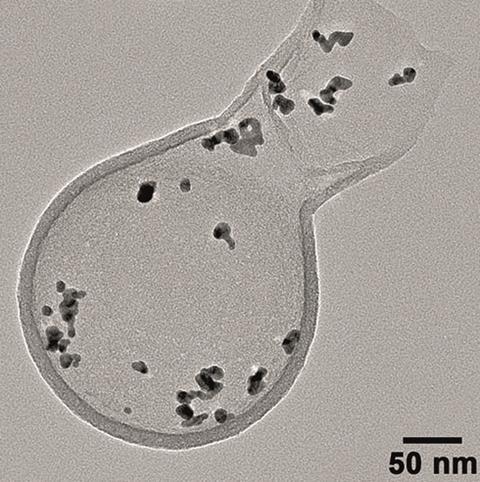 This silica ‘nanoflask’ is one of the smallest pieces of glassware you could possibly dream of. A team of scientists in China and Australia have prepared a collection of flask-shaped hollow nanoparticles, which feature a hydrophobic external surface and a hydrophilic inside.

Despite the tiny vessels being just 350nm wide, researchers managed to use them in the same way as life sized glassware and carried out reactions within them. First, they were able to synthesise gold nanoparticles (AuNPs) directly inside the nanoflasks, and then they showed how these AuNPs could catalyse the reduction of 4-nitrophenol.

The team showed the flasks can also be deployed as nano-sized ‘rockets’, by filling them with hydrophilic platinum nanoparticles and submerging them in a solution of hydrogen peroxide. Because platinum catalyses the decomposition of hydrogen peroxide into water and oxygen, the nanorockets started to move around the solution, propelled by the emanating gas. By increasing the peroxide concentration, the team could make them move around up to ten times as fast.