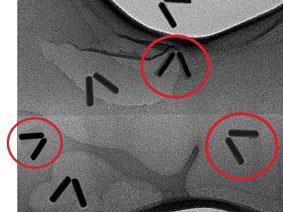 Two papers published by the same University of Utah lab in the US came under suspicion last year after it became apparent that they contained fabricated transmission electron micrograph (TEM) images. Now an internal investigation has concluded that it was a graduate student who manipulated the images.

The first paper, which appeared in Nano Letters in June 2013, was retracted fairly quickly, and now the ACS Nano paper has also been withdrawn. Meanwhile, an internal investigation at the University of Utah has concluded that all of the images in the papers were manipulated, and that graduate student Rajasekhar Anumolu was responsible. The university subsequently denied Anumolu his doctorate.

‘The other authors, it was determined, were not responsible for any of the data manipulation and were not aware that the manipulation had occurred,’ says Jeffrey Botkin, the university’s research integrity officer and associate vice president for research.

After reviewing five papers by the same research group, which was from the lab of Leonard Pease, the university’s internal investigation found that only the Nano Letters article and the ACS Nano paper in question contained falsified images.

Although both of the scientific papers had acknowledged that their research received funding from government agencies like the National Institutes of Health, the University of Utah’s investigation committee concluded that no federal funds were used for either project.

Had such public money supported the work, then government agencies might have conducted their own separate investigations and possibly ban those found guilty of research misconduct from receiving future funding or serving on advisory committees for several years, Botkin explains.

‘If there were not federal funds involved, then the agencies don’t have any jurisdiction in either of these cases,’ he says. ‘This is basically a closed case now.’

Regarding Pease’s role in the questionable research papers, Botkin notes that the investigation determined that the level of oversight was not deemed to be poor enough to constitute research misconduct. He says any additional action against Pease would be taken by the school’s chemical engineering department, where he works.

Image manipulation has become the most common source of research misconduct allegations in the US, according to Botkin. He says roughly 70% of new accusations in this area arise from concerns over data falsification involving images.

‘I suspect it is because people think that they can do stuff with Photoshop, but aren’t very good at it,’ Botkin remarks. But he acknowledges that it is probably easier to detect image falsification because the visual doesn’t look right, while it’s more difficult to detect things like made up numbers on a spreadsheet.