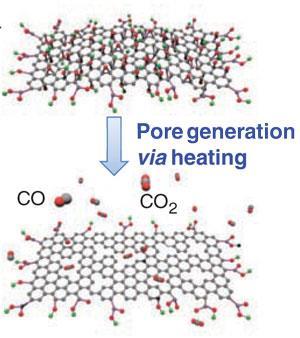 Two independent groups of researchers have demonstrated graphene-based membranes that can separate gas molecules according to their size and shape. One of the membranes separates hydrogen from nitrogen and carbon dioxide,1 while the other membrane separates carbon dioxide from nitrogen,2 and could be used in carbon capture processes to curb greenhouse emissions.

Graphene is an atom thick layer of graphite made up of carbon atoms arranged in hexagons, like atomic-scale chicken wire. Since the material was first produced in 2004 – an achievement recognised by the 2010 Nobel prize for physics – scientists have discovered it has a host of superlative optical, electronic and mechanical properties. Another property which scientists have been interested in, however, is its permeability to gases. If graphene were permeable to different gas molecules, it could be used as a filter and, as it’s one atom thick, it could separate molecules very quickly.

Unfortunately pure, undamaged graphene is impermeable to all gases, because its atoms are surrounded by dense electron clouds. But graphene is difficult to manufacture, and samples almost always contain defects, such as holes, tears and grain boundaries, through which gas molecules could, in principle, seep. Even more defects can be introduced into graphene if it is reacted with an acid to produce graphene oxide, in which some of the carbon–carbon bonds are broken to re-form with oxygen atoms.

Park and colleagues discovered that if the membrane was well-interlocked, and if the gases to be separated had a high water content, the membrane would block the passage of nitrogen but allow through carbon dioxide. The humidity is what allows this separation, according to Park, because it fills the membrane with tiny drops of water through which carbon dioxide – but not nitrogen – could dissolve. The researchers believe this membrane could be used to capture carbon dioxide from certain industrial processes, such as coal burning, and thereby reduce greenhouse emissions.

In a separate development, Miao Yu at the University of South Carolina, US, and colleagues have created a graphene oxide membrane that can separate carbon dioxide from hydrogen, and hydrogen from nitrogen. The researchers believe that their membrane – which they created by vacuum-filtering a dispersion of graphene oxide through a porous support – could find applications in water treatment.

Vladimiros Nikolakis at the University of Delaware, US, says both developments are interesting. ‘Fabrication of ultra-thin, highly selective membranes is important in order to reduce the membrane surface area requirements in a particular separation,’ he says. ‘These two articles demonstrate that this is feasible using graphene oxide or graphene layers. The fact that the selectivity can be tuned by adjusting the membrane preparation or treatment conditions indicates that further improvements might be feasible.’

Henry Foley at the University of Missouri System, US, says the use of graphene-based membranes to perform gas separations has been ‘something of a holy grail’. The fact that the membranes are just a few atoms thick, he says, may solve existing separation problems, such as the resistance to flow. ‘Time will tell if these [membranes] are relevant for new technology [or] new science, but these are exciting results,’ he adds.