Graphene’s showdown with the man with the golden gun 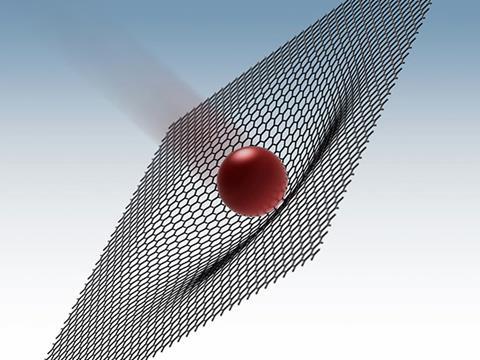 Engineers in the US have created a miniature shooting range to show that multilayer graphene, 10 to 100nm thick, may make excellent body armour. The results suggest graphene may absorb 10 times the amount of energy steel can before failing.

Since the discovery of graphene in 2004, the material has been lauded for its static strength and stiffness, owing to its two-dimensional honeycomb structure. One of the more outlandish illustrations of its strength, according to some researchers, is that it could withstand the force of an elephant balancing on a pencil.

But it has never been subjected to the extreme conditions of high speed ballistics, the true strength test for armoured materials. ‘We are the first group to test [graphene] under high speeds comparable to actual bullet speeds,’ says Jae-Hwang Lee from the University of Massachusetts, US.

‘We cannot use conventional techniques such as a gun barrel or gunpowder [on this scale],’ explains Lee. ‘Instead we used a laser to accelerate a microscale silica bullet [at the multilayer graphene target].’

The bullet was propelled into stacked graphene sheets at supersonic speeds of up to 2000mph by the gases produced by laser pulses rapidly evaporating a gold film. The team calculated the energy difference of the bullet before and after to determine the energy absorbed.

Neil Bourne, director of the National Centre for Matter under Extreme Conditions in the UK, who was not involved in the research, described the technique as ‘very exciting’.  ‘They have taken a standard laboratory ballistics configuration and demonstrated its utility on microscopic scales,’ he says.

Graphene was able to absorb up to 0.92MJ/kg of ballistic energy in the test, with cracks forming around the impact zone. By comparison, steel targets only absorbed up to 0.08MJ/kg at the same speed.

‘The game here is energy absorption,’ says Edwin Thomas, Lee’s colleague and Dean of Engineering at Rice University, US.‘ If you can nucleate many cracks, it is a way of spreading the impact into more material.’ Thomas likened the effect seen in graphene to that of tempered safety glass, a material engineered to spread damage and not locate it to a point.

Graphene’s high performance is down to its high stiffness and low density, both of which control the speed of sound in the material. The stiffer and lighter the material is, the faster sound, stress and energy can travel through it. Thomas explains that if you are able to spread the energy at higher speeds across the target area, more of the material will support the load and reduce the damaging effect of the bullet.

The team argues that graphene’s dynamic strength is significant as it may behave similarly to materials specifically engineered to stop bullets, such as Kevlar, a fabric composed of aromatic polyamide threads. ‘This is a worthy step down the line of illustrating the immense potential benefits [graphene] would make,’ says Bourne. ‘[It] opens up the problem to engineers to try to make [this material] on a scale where it can have a significant impact in the field.’