Recycling car tyres is no mean feat. However, scientists in the UK have developed a chemical route that breaks down the base rubber in tyres into useful materials, at room temperature. 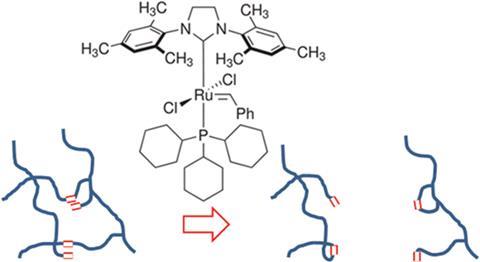 Cross-linked rubbery networks can be broken down using Grubbs' catalysts

The UK alone generates approximately 55 million waste tyres each year. Tyres are difficult to dispose of because of their awkward shape and leachable toxins. They can be recycled by cutting or grinding into ‘rubber crumb’ for use as a building material, or by heating in an oxygen free environment to make crude fuels; both are energy intensive processes. Even in developed countries, over half of all used car tyres are burned for fuel.

Now, a team of scientists at Durham University led by Ezat Khosravi have developed a new way to break down styrene butadiene rubber at room temperature and without mechanical input, by placing it in dichloromethane with a ruthenium-based Grubbs’ catalyst. ‘In natural rubber you see the presence of double bonds,’ explains Khosravi. ‘We thought by implementing cross metathesis using a ruthenium initiator we would be able to break down the rubber network in the presence of a simple ester, but surprisingly the reaction worked with just the catalyst, which was very interesting.’

As crosslinks in the rubber network are cleaved and polymer chains fragment into smaller chains, the material physically disintegrates into rubber crumb. By allowing the reaction to continue, the material was further broken down into an oil comprised of low molecular weight oligomers. In theory, these could be repolymerised into a new rubber product with different properties.

Josée Brisson is an expert in polymer characterisation and mechanical properties at Laval University in Canada and she is excited about the work: ‘This technique has the potential to become the equivalent, for some rubbers, of PET [poly(ethylene terephthalate)] depolymerisation, which has allowed PET to become one of the main recycled polymers.’ But, she adds that there is a lot of work to do before applying the reaction to an actual tyre, which is chemically much more complex.

Richard Thompson helped analyse why the reaction still works without the ester, and is interested in potential downstream applications: ‘First we need to try and repolymerise what we have made and test its properties, and we need to find a more benign solvent [than dichloromethane] before we can think about scaling up. I think it will be very interesting to see what happens if you do reprocess the material in this way, producing quite a different internal structure from a naturally polymerised rubber.’