US researchers have created a graphene-based device that guides electrons through the material in the same way an optical fibre guides light, using electrical gates. The work suggests new ways to create electrically reconfigurable wiring in future graphene-based electronic devices.

Graphene is a single layer of carbon atoms arranged in a hexagonal lattice and is an excellent conductor, making it a promising material for high speed electronic devices. However, controlling how electrons behave within the material - crucial for making useful devices - has remained a challenge.

The device created by Charles Marcus and his team at Harvard University in Cambridge, Massachusetts, uses electronic ’gates’ to tweak the electronic properties of the graphene. By applying different voltages to the gates, using electrodes on a slice of graphene, the team were able to control the electronic equivalent of refractive index to create a channel and guide electrons in the material. 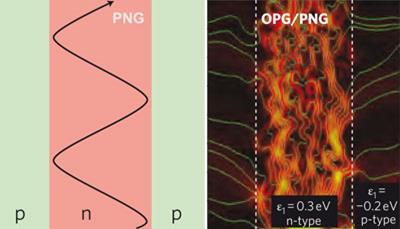 ’Fibre optic cables are a ubiquitous element of modern optics. Electrons in graphene behave in a similar way, so we built a fibre-optic like device and it worked,’ says Marcus. ’But what doesn’t exist in optics are p- and n-type materials,’ he adds. P-type semiconductors transport positively charged ’holes’ whereas n-type materials transport electrons. Interfaces between the two types of material - called p-n junctions - are the elementary wiring components of most semiconductor electronic devices including transistors, solar cells and LEDs.

The gates on the team’s device can also be used to turn some regions of the graphene into n-type and others into p-type. A channel defined by two p-n junctions could also guide electrons in the graphene. The two techniques could be used independently or combined in a single channel, explains Marcus, ’So we not only realised the fibre optic in electronics, but we went beyond it, to an entirely new regime.’

’It explicitly shows and quantifies experimentally effects that were predicted theoretically,’ comments Vitor Pereira, who researches graphene at the National University of Singapore. ’Namely that graphene p-n junctions have the same effect on electron flow that Veselago (negative refractive index) lenses have on light rays. This allows for much added versatility in terms of electronic "optics" - like focusing, lensing and guiding - than what can be achieved in normal electronic systems.’

Marcus suggests that the work could allow for reconfigurable wiring in graphene. ’It’s a way of defining the location of wires electrically, instead of lithographically. Any region has the potential to be part of the wiring,’ he says. Pereira is excited about this prospect: ’Imagine a chip or an electronic circuit whose wiring and different elements can be changed or created on demand, in real time, without actually physically changing anything within it,’ he says.