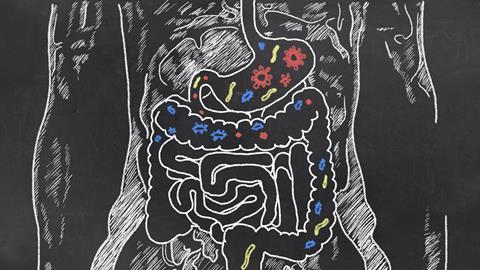 Start made on revealing scale of gut bugs' hijacking our signalling

Bugs in our gut have been found to make a plethora of chemical copycats of our own signalling molecules. These simple lipids can interact with important cell receptors in our body that have the ability to affect our health. The researchers claim that these bacteria might even be genetically engineered as a way to treat diseases such as diabetes.

The study identified a range of bioactive lipids (N-acyl amides) made by gut bacteria.1 N-acyl amides are a large family of lipids known to influence inflammation, immunity, appetite and glucose metabolism. A previously discovered molecule from this family (commendamide) that is made by bacteria is similar to a human lipid. 2 This set the authors off on a hunt through human microbiota genomes.

They identified and synthesised around 50 genes that they predicted might encode similar lipids and inserted them into E. coli. These lipids were then tested against important human receptors – G-protein coupled receptors (GPCR). ‘Humans make N-acyl lipids that turn on GPCRs,’ says Sean Brady, senior author and a researcher at Rockefeller University, US. ‘These are some of the most important cell surface receptors [in humans] and the most common target for small molecule drugs. They transmit information from the surface of a cell to within.’

A number of bacterial molecules were found to be ligands for GPCRs. The scientists homed in on one such microbial lipid – N-acyl serinol – that was structurally similar to a human ligand for GPR119, a cannabinoid receptor linked to control of blood glucose.

The team then engineered a bacterium to produce the lipid and then fed it to mice. ‘We could alter the response of the mouse to a glucose challenge by having it colonised with a bug that makes this molecule,’ says Brady. ‘This suggests that there is potential for manipulating the microbiome to have a therapeutic effect.’

Firms have previously developed small molecules targeting the GPR119 receptor as a possible treatment for diabetes, Brady notes. He suggests that an engineered microbe might be able to deliver a natural ligand and so modulate satiety and glucose levels, relevant to the treatment of obesity and diabetes.

‘The capability of the microbiome to synthesise this broad class of molecules points to their potential physiological relevance,’ says Emily Balskus, a chemical biologist at Harvard University, US. ‘It nicely highlights how members of the human microbiome have evolved to mediate important interactions with the host.’ She predicts that it will inspire others to search for additional classes of metabolites. And she expects further experimental work will now attempt to ‘figure out the physiological roles of these molecules’.

This is echoed by Brady. ‘This is the tip of the iceberg in terms of characterising the chemistry that the microbiome makes.