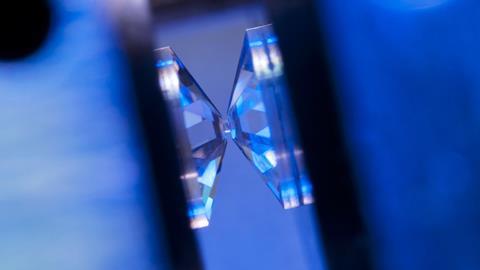 Has metallic hydrogen been discovered?

The science behind chemistry’s latest controversy

What is metallic hydrogen?

Hydrogen exists in many forms and phases. But back in 1935, the solid-state physicists Eugene Wigner and Hillard Bell Huntington proposed perhaps its most exotic phase. The pair theorised that, under pressures of at least 25GPa (25 million times the standard pressure of the Earth’s atmosphere), a molecular hydrogen lattice will break apart, allowing electrons to flow freely through it – creating metallic hydrogen.

Why is it so important?

Superconductors can conduct electrical current with zero resistance, while also expelling all magnetic fields. These properties help Maglev trains to glide above the ground or MRI machines to produce stunning anatomical images. But their use comes at a cost – they only work at extremely low temperatures.

Later, in 1972, Russian scientists suggested that metallic hydrogen would be a metastable metal: meaning it would stay in this phase even if the pressure is relieved.

How do you make metallic hydrogen?

Good question. Scientists have been hunting for metallic hydrogen for decades, and it’s largely been a fruitless quest. As the pressure ramps up, the hydrogen lattice simply rearranges to form a series of increasingly complex solid structures that can’t conduct current. No one knows what it will even look like, with some commentators suggesting it won’t even be solid.

The standard technique involves squeezing a hydrogen compound – typically hydrogen sulfide – between two flattened diamond tips. Bringing the micron-wide tips together can generate pressures of more than 300GPa. This is known as the diamond anvil cell (DAC).

Research groups can use the DAC in one of two ways. Those hunting for solid metallic hydrogen ramp up the pressure, while holding the sample at low temperature. This approach has allowed Eugene Gregoryanz’s group at the University of Edinburgh, UK, to probe a myriad of solid hydrogen phases.2 Last year, Gregoryanz’s group managed a top pressure of 388GPa – but there was no sign of the elusive metallic phase.

The DAC can also guide researchers through the landscape of liquid hydrogen phases, but it’s a journey fraught with risk. In the past, Isaac Silvera and Ranga Dias, from Harvard University, US, have placed their samples under the ostensibly low pressure of 150GPa and fired laser pulses at the diamond tips coated with tungsten. As the films heat up, the hydrogen temperature increases up towards 2200K. Such extreme heating can shatter the diamonds, but the team claim the pulses are too short to cause any lasting damage.

In their most recent work, Silvera and Dias adopted the low temperature approach and, in January 2017, claimed to have gazed upon this fabled prize at a pressure of 495GPa.1 It’s a claim made all the more significant given the likely scientific and societal implications.

Unfortunately, not everyone agrees that they have succeeded.

What’s the problem with their claim?

Making metallic hydrogen is one thing, but detecting it is another – and this is where the controversy lies. Most groups monitor how hydrogen’s vibrational modes absorb light. But, again, any incoming light can damage the cell if not used sparingly. It’s a situation only made more precarious when spectroscopy helps establish the DAC’s pressure. Research teams take the risk, but are limited in the pressures they can achieve as the diamonds absorb the incoming light.

Silvera and Dias’ experiment beats that record. However, rather than note the pressure at regular intervals using spectroscopy, the team only recorded the spectrum at the highest pressure to preserve the precious diamonds. To monitor the pressure the pair instead treated the DAC as a strain gauge: the force exerted on the cell by slowly rotating the screws bearing down on the diamonds is directly proportional to the pressure.

Critics argue this method is too unreliable. Mikhail Eremets and Alexander Drozdov from the Max Planck Institute for Chemistry, Germany, stated using a simple load measurement is ‘unacceptable’ in a recent response on arXiv.3 Other groups have also posted responses to the work, with one suggesting the pressures are ‘largely overestimated’.4

Silvera and Dias have also drawn criticism for how they identified their prize. Again, the team has steered away from spectroscopic analysis and tried instead to look for changes in the sample’s reflectivity. At a certain pressure, the hydrogen should transform from an opaque mass into a highly reflective phase, shining like newly-forged steel.

The pair have captured a single image of this gleaming sample on a modified stereo microscope, which, according to Silvera and Dias, is the first image of metallic hydrogen. But they may have just taken a picture of the rhenium gasket housing the hydrogen, and not metallic hydrogen itself, Gregoryanz told Chemistry World last month.

Has metallic hydrogen been discovered?

Eremets and Drozdov contend that no one can claim to have discovered hydrogen metal until its conductivity is also measured. But even if Silvera’s lab could analyse the sample for any sign of conduction, it’s too late: the diamonds locking the sample in place have failed and the seemingly reflective hydrogen has vanished. This dispute is unlikely to be settled soon, and until it is resolved, Silvera and Dias’ claim will not be recognised officially.

At the moment, questions remain over the true identify of this ephemeral phase. One thing is evident, however – it’s certainly not metastable.