The ISIS synchrotron at the Rutherford Appleton Laboratory, Oxfordshire, UK, has launched a second target station for neutron beams which will allow scientists to study a range of new systems: from polymers and materials that sequester carbon dioxide, to soft matter and biomaterials.

Experiments on the ?145 million station at the facility - which is owned and run by the Science and Technology Facilities Council - are expected to start in October 2008, following five years of design and construction. A test beam to generate the first neutrons at the new target was due to be fired in the first week of August. From 2009, scientists around the world will be invited to apply for beam time. 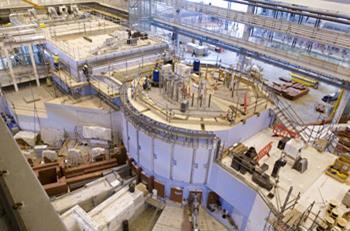 The interior of the new target station at the ISIS facility

Neutrons scatter from materials to give information on the location and movement of atoms within a sample. They’re produced when protons, accelerated over 143 metres by ISIS’s synchrotron, strike a tungsten target.

ISIS’s second beam is not a clone of its first. The new beamline cuts experiment run time because its neutron flux (the number of neutrons produced as a function of time) is 10 times greater. A wider range of wavelengths is also available, and background noise is better suppressed, revealing greater detail. And the instruments built into the new target are designed to study samples at a different scale.

’The message we were getting from the community was that they wanted to study bigger molecules, over longer timescales. The applications from scientists wanting to study soft matter and biomaterials were getting stronger and stronger,’ ISIS director Andrew Taylor tells Chemistry World.

Seven neutron scattering instruments have been initially installed at the target station. The first instrument to receive neutrons will be Inter, a high-resolution, high-flux reflectometer designed by ISIS scientist John Webster to study chemical interfaces by bouncing neutrons off them.

Inter will study a wide variety of systems, says Webster - including the behaviour of biosurfactants, the interfaces between layers of thin polymer films used in organic LED screens, and the way drug molecules interact with membranes in the body.

A great advantage of neutrons over other probes such as x-rays, Webster points out, is that they are scattered by atomic nuclei, which means they can distinguish between isotopes of atoms in a sample; for example, between hydrogen and deuterium. ’By playing with the deuterium content, you can highlight [label] different components of a complex mixture to see how much of each there is at a particular time,’ says Webster. The improved signal-to-noise ratio of the new instrument means ever more complex mixtures can be studied, with smaller and smaller components labelled.

Julian Eastoe, who studies surfactants and amphiphiles at the University of Bristol, became involved in the ISIS project when asked to coordinate consultation with the user community over one of the proposed instruments to be built into the second target station. The instrument he championed, called SANS2d and used for small angle neutron scattering, is another early pick for ISIS.

SANS2d will directly impact Eastoe’s work into surfactants and fluids that sequester carbon dioxide - potentially important for attempts to mitigate climate change by capturing and storing the gas. ’SANS2d allows you to study how CO2-base fluids might be manipulated into a gel or colloid,’ he explains. ’To store liquefied CO2 you need a way to control the fluid; for example you might incorporate polymers or surfactants to make a gel-capping layer to seal an underground CO2 reservoir.’

Useful experiments don’t just rely on sophisticated instruments, Eastoe adds. ISIS workers can now enjoy the support of the Oxford Isotope facility - which in late 2007 won a five year funding award from the Engineering and Physical Sciences Research Council. Developed jointly by Robert Thomas at the University of Oxford, and Jeff Penfold at ISIS, the facility provides deuterated compounds needed to fully exploit each instrument’s potential.

’Without putting creative, inventive samples that have been carefully thought out into an instrument, you don’t get much out of it,’ says Eastoe. ’In combination, the hardware instrumentation, and the chemical technologies that the deuteration facility can produce, put us into a completely different league, globally. In my opinion, there would be no other country that would be able to compete with us in that arena.’

Taylor has plans to expand the facility’s capacity further. By 2016, a total of 16 instruments will be incorporated into the second target station, added at a rate of 2 per year.  Beyond that, Taylor has plans for a third beamline.

’The Americans have just spent $1.4 billion, and the Japanese $1.8 billion, to catch up,’ says Taylor. ’We’re competing very effectively with these new billion dollar sources, but they’re megawatt class where we’re 200 kilowatt class. It’s not just power that matters, but also the sophistication of the instruments, which we’ve been honing for 20 years, and I think we’ve got another decade before these facilities give us a really hard time. On that timescale we should be thinking of upping our power as well, and if I want to go to multi-megawatt class capability, I’ll need a third target. By 2020, we’ll have a third target.’