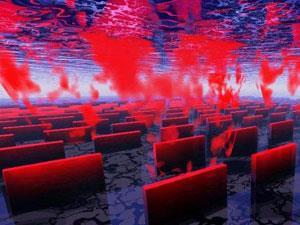 Living things can take control of the physical environment in which they find themselves, monitoring and controlling their temperature, pH, various internal pressures and ion concentrations through a range of self-regulating feedback loops. Synthetic materials, in stark contrast, rarely have the capability to respond to environmental changes in anything but an entirely passive way. At least that was the case for most materials until very recently.

A US team, based at Harvard University, in Cambridge, Massachusetts and the University of Pittsburgh, Pennsylvania, has taken inspiration from nature to develop materials that are homeostatic, allowing for self-regulation through chemical and mechanical feedback. The materials function at the nanoscopic or microscopic scales and could find applications in healthcare or as ‘smart’ building materials for controlling energy usage.

The materials contain bilayer microstructures within which is embedded a catalyst supported on a temperature-responsive hydrogel. This component is separated from a second, so-called ‘nutrient’ layer containing reactive components on which the catalyst acts. The gel responds to temperature or pH changes – swelling when heated and contracting when cooled or when pH rises and falls – allowing the catalyst embedded in the micropillars to come into contact with the reactants. This process of actuation is reversible so that the system functions as a type of on/off switch. The reversibility of the process allows the gel's behaviour to act as a feedback loop regulating the temperature, pH or the release of specific chemicals from the reaction layer.

The team has dubbed their simple system SMARTS – self-regulated mechanochemical adaptively reconfigurable tuneable system – and say that it is highly customisable because a wide range of different reactions might be incorporated into the tuneable system. A proof of principle system was constructed using a poly(acrylamide)-co-acrylic acid hydrogel in a microfluidic channel in which a laminar flow was used to carry a stable liquid bilayer – one catalyst and one nutrient layer – across the hydrogel. In this case, the on/off actuation is pH triggered and the switching is revealed through the quenching of fluorescein dye when potassium iodide from the nutrient layer is released from the catalyst layer by expansion of the gel.

The team says switching is very rapid, occurring in either direction within a fraction of a second. They demonstrated how they could generate a pulse of oxygen bubbles using the on/off actuation with a platinum-catalysed hydrogen peroxide decomposition reaction that responds to the changing state of the gel depending on external stimulus. More sophisticated reaction schemes might also be set up to emulate physiological conditions and allow delicate biological scenarios to be coped with in drug delivery, for instance, based on pH, heat or glucose concentration. The team demonstrated how thermal homeostasis might be achieved using the temperature-responsive hydrogel poly(N-isopropylacrylamide). Such a system might be useful in making energy-efficient homes even more efficient using this system in conjunction with panels of self-regulating insulating material.

‘This is an exciting and completely novel approach to generate a self-regulating material through a feedback loop,’ says Peter Fratzl of the Max Planck Institute of Colloids and Interfaces, Potsdam, Germany. Fratzl points out that homeostatic feedback loops are well-known throughout biology where they control calcium or hormone levels in our blood serum among many other systems. ‘The system invented by Ximin He and co-workers is based on a cyclic reaction controlling temperature in an autonomous way. The feedback is realised by a coupling between mechanics (the bending of a micro-pillar) and a chemical reaction. Systems of this kind may be useful to keep temperature (or other parameters such as pH) constant in a completely self-sustained way.’

Fratzl adds that the cyclic reaction system – with its micro-pillars moving up and down – also essentially constitutes an automatically regulated micro-motor. ‘This paves the way towards even more exciting applications, namely the development of autonomous microactuators which might generate motility at very small scales,’ he adds.