Researchers in Bangladesh and the US have found that arsenic adsorption by sediments could help prevent the salts intruding into groundwater more than 150 metres deep. This matters because this water is often pumped up for irrigation, drinking water and other uses.

For more than two decades, researchers have been concerned with the widespread and insidious poisoning of hundreds of thousands of people on the Indian sub-continent exposed to drinking water contaminated with soluble arsenic salts. The issue is exacerbated by agriculture drawing excessive groundwater for irrigation causing arsenic to leach into drinking water supplies. There are many theories to explain how arsenic gets into groundwater in this region, from pyrite oxidation and redox processes to carbon flow and microbial activity, but nobody knows the exact mechanism.

Author Kathleen Radloff, formerly a graduate student at Columbia University, US, and colleagues, including geologists at the University of Dhaka, India, injected arsenic-rich water into a deep aquifer zone in Bangladesh, and then monitored the changing concentration of dissolved arsenic as water was then withdrawn. Arsenic concentrations in withdrawn groundwater fell by 70 per cent within 24 hours.

Levels of a tracer compound added to the water remained constant during this time. The team suggest that the soluble arsenic salts are adsorbed by sediments at this depth. Their model of groundwater flow across the Bengal Basin shows that the presence of sediments could lower the risk of arsenic contamination over a much wider area than previously thought. 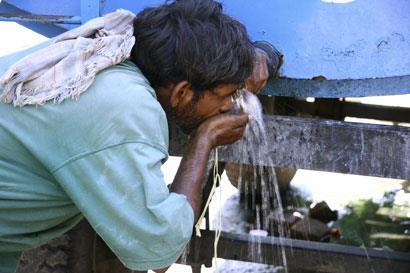 Surveys of hand pumped tube wells that draw water from more than 150 metres deep reveal that almost one in five in Bangladesh and a quarter of those in the most contaminated districts of West Bengal have arsenic levels higher than the World Health Organization’s safe limits.

The contamination might be due to local problems such as poor well construction, naturally occurring arsenic in the groundwater, even at this depth, or contamination of deep groundwater by arsenic from shallower sources.

Dipankar Chakraborti of Jadavpur University is a leader in the field of arsenic contamination having brought the issue to the attention of the scientific community in the 1990s. ’The Nature Geoscience paper considers how deep aquifer sediment will absorb arsenic resulting in safe water. But, will this procedure work the same all over the Bengal Delta?’ asks Chakraborti. ’There could be secondary effects and consideration must be given to differences in Bengal Delta sub-surface geology.’

’It is important to verify how adsorption changes across the Delta,’ adds Radloff. ’We specifically made very conservative assumptions in our modelling, since it is likely that different parts of the basin, with different sediment, will also have different responses.’