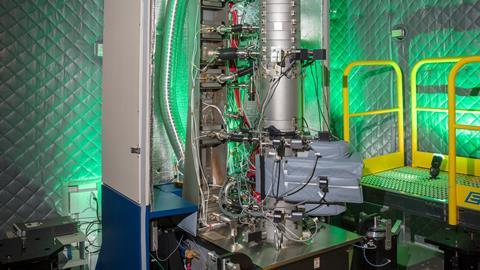 Researchers in the US have used an electron microscope to directly detect isotopes at specific sites in molecules of alanine. The technique could potentially be used to track biomolecules in whole-cell samples at the nanoscale.

Isotopic labelling is a widely used technique to understand chemical and biochemical reactions. An atom in one of the reactants is replaced by one of its isotopes, and by detecting the position of the isotope in the product, chemists can infer the route that the atom took reactant to product and unravel the mechanism. 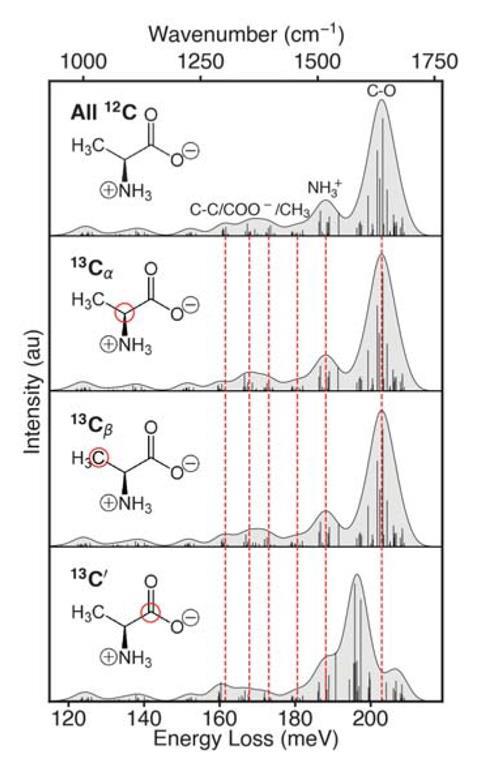 Researchers commonly use mass spectrometry to detect these isotope labels, but this breaks apart the molecule, which risks losing valuable structural information. Non-destructive techniques such as infrared spectroscopy and neutron scattering can also be used because they can detect the different vibrational frequencies of chemical bonds involving heavier isotopes. Unfortunately, explains electron microscopist Jordan Hachtel of Oak Ridge National Laboratory in Tennessee, ‘There’s no real spatial resolution in these techniques. They just blast the sample, look at the absorption and say “We’ve got this, this and this”. There are some other high-end techniques that achieve spatial resolution, but for each one there is a specific set of constraints and trade-offs.’

Hachtel has now used electron energy loss spectroscopy (EELS) to detect isotopically labelled samples with nanoscale spatial resolution. EELS involves exciting a sample with electrons and measuring how much energy the transmitted electrons have lost to deduce the energy of processes they have excited in the sample. The technique was first developed in the 1940s, but the energy spread in electron beams was, until recently, far too large to resolve low-energy excitations such as bond vibrations. Today, however, electron beams of very precise energy can be obtained.

Hachtel and colleagues used an electron beam less than 0.1nm wide, but pointing this directly at an organic molecule would rapidly destroy the sample. They therefore aimed the beam a few nanometres away, using the electric field around the electrons to excite the molecule’s bonds. Having determined that labelling alanine’s carboxylate (C′) site with carbon-13 shifted the EELS response for the C′–O bond by 5meV compared to carbon-12, the team scanned the beam across a sample containing discrete clusters of 12C′ and 13C′-labelled alanine molecules. The technique could distinguish between isotopically distinct clusters less than 200nm apart, and the authors predict that the technique’s true spatial resolution could be tens of nanometres. 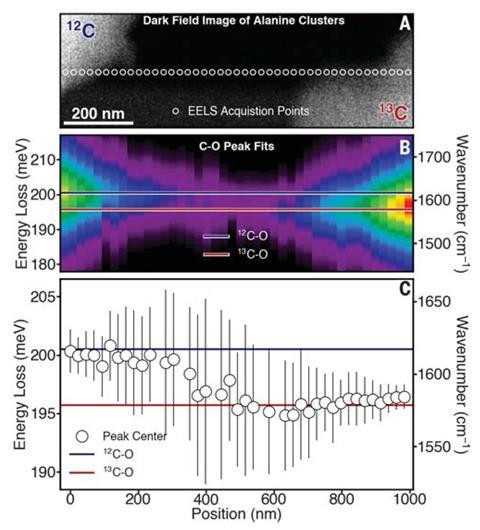 The researchers now plan to study more complex molecules: ‘We’re trying to make an atlas of how well we can observe all the peaks in different amino acids in an electron microscope and where we can put isotopic labels such that they can be used in real experiments in biochemistry,’ says team member Juan Carlos Idrobo. ‘You could have a single cell 10nm in size and another cell 100nm away with a completely different structure and you would be able to see those differences.’

Isotopic labels are ‘one of the first things you’d want to look at once you had a probe with sufficient energy and spatial resolution,’ says Philip Batson of Rutgers University in the US. ‘These results are consistent with what others are finding, but this is the first paper that demonstrates to a sceptical person that this works and shows the conditions you need to set up to make it practical.’ Electron microscopist Rebecca Nicholls of Oxford University agrees: ‘This is quite a fast-moving field at the moment because of the development in instrumentation that allowed this huge increase in the energy resolution of EELS. We’re still finding out where this technique can be useful.’