Researchers in Japan have created the first superconducting material based on a molecule of carbon and hydrogen atoms. Although the superconducting transition occurs at a chilly 18K, the simplicity of the molecule, which consists of just five benzene rings, suggests that it will open the door to other molecules that have higher transition temperatures.

Superconductivity occurs when a material is cooled below a certain transition temperature (Tc) so that its electrical resistance disappears. The first superconductors were pure metals and had Tc  values close to absolute zero, but over the past 25 years scientists have begun to discover various ’high-Tc’ materials, including cuprates and, most recently, iron arsenides. Ideally, the material would have a Tc at or above room temperature, so that it could be used without cooling in technologies such as lossless power transmission and magnetic levitation.

Since the early 1990s scientists have been working on organic superconductors in which conductivity arises in the pi-electrons of unsaturated bonds. But the charge-carrying electrons in these molecules have typically been derived from sulfur or selenium atoms, rather than carbon atoms. Now, however, Yoshihiro Kubozono and colleagues at Okayama University and other Japanese institutions have created the first organic superconductor based on a simple aromatic molecule, picene (C22H14), doped with an alkali metal. 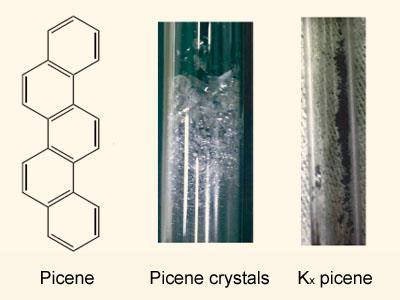 ’Certainly it is an extremely important discovery and one which I think will raise huge interest,’ says Neal Skipper, a condensed-matter researcher at University College London, UK. ’There are many other candidate aromatic molecules that may need to be revisited - perhaps Tc can be pushed up even further.’ Skipper adds that the mechanism for superconductivity could relate more to doped 3D carbon ’fullerides’ than doped graphite, which actually shares a similar herringbone structure.

The Japanese researchers are now studying the effect of different metal atoms in picene, and of metals in other aromatic hydrocarbons. ’The key to making a higher Tc organic superconductor may be an increase in the density of states on the Fermi level,’ explains Kubozono. ’In other words, it may be important to use more expanded aromatic hydrocarbons that consist of more than five benzene rings.’