Researchers in the US have demonstrated an imaging technique for studying the conversion of biomass into fuel-friendly sugars. The technique, called stimulated Raman scattering (SRS) microscopy, is better than others because it can give quantitative readings of the species present.

Biomass is often cited as a renewable source of energy that could reduce our dependence on fossil fuels. Its two most important species are lignins and polysaccharides, which can be broken down into simple sugars for fermentation into ethanol. However, with many different types of chemical bonds, and with very complex structures, lignins don’t take to decomposition easily. Scientists try to do it with enzymes, but to understand the most effective methods they need analytical tools to study the process.

Raman spectroscopy is one such tool. It can determine the species present in a sample from the scattering of laser light, although can take hours to record an image of even modest resolution. The next generation of Raman spectroscopy is so-called coherent anti-Stokes Raman scattering (CARS) microscopy, which uses an additional laser to bring higher resolution and sensitivity. But CARS microscopy suffers from an electronic background signal, which makes it impossible to determine the species present quantitatively. 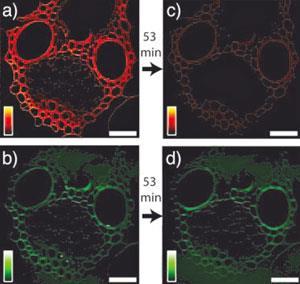 Real-time SRS imaging of a delignification reaction in corn stover. a) shows the lignin signal before the start of the reaction and c) after 53 minutes of acid chlorite treatment showing significant reduction in lignin. b) shows the cellulose signal before treatment, and d) after treatment.

RS microscopy - as now demonstrated by Shi-You Ding of Oak Ridge National Laboratory, Tennessee, and colleagues - offers a way around this problem. In the group’s demonstration, two near-infrared lasers with different frequencies were overlapped and trained on a sample of corn waste. Once the frequency difference matched a resonance in the sample, energy transferred between the beams, generating a signal. With no background, and with the signal linearly dependent on the species presence, SRS was able to quickly image the distribution of lignin quantitatively.

Ji-Xin Cheng, a researcher who studies biomass imaging at Purdue University, US, says it is a ’nice application’ of SRS microscopy, although he notes that CARS will continue to be a valid tool for features such as myelin sheaths and lipid droplets. ’In these cases, the coherent addition of CARS fields produces a strong CARS signal, which permits selective imaging of myelin dynamics and fat storage in live tissues and in vivo,’ he says.