Researchers have discovered a way to make large amounts of a stable and pure form of a copper–zinc mineral called georgeite. The team says that it produces superior catalysts for industrially important reactions, including methanol synthesis and the water–gas shift, than traditional copper–zinc catalyst precursor minerals. 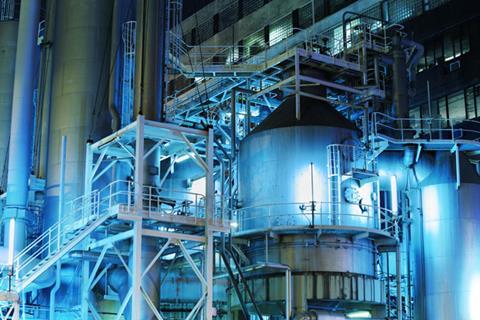 Previously georgeite has not been investigated because its natural form is incredibly rare. Georgeite does form fleetingly in the co-precipitation process that is used to prepare the conventional copper–zinc catalyst precursor malachite. However, this georgeite reacts with water and rapidly converts to malachite. What’s more, the co-precipitation process typically uses sodium carbonate which can poison the catalysts.

Now, researchers based in the UK, Denmark and US have discovered that a supercritical carbon dioxide precipitation process can produce stable and very pure georgeite. It is able to do this because the water–ethanol solvent is extracted rapidly. This keeps the georgeite dry, preventing it converting to malachite.

The synthesis of substantial amounts of the mineral has meant that researchers could investigate its potential as a catalyst precursor for the first time. To prepare a catalyst from the mineral the researchers first heated it and then reduced it.

‘Our findings demonstrate the importance of advanced synthesis methods in accessing unusual phases, including georgeite, in good yield and purity,’ says lead author Simon Kondrat at Cardiff University, UK. ‘Once these materials can be made successfully on a lab scale they can be selectively used as catalysts for a wide range of different reactions.’

Tests on the catalyst demonstrated good performance for methanol synthesis and in the water–gas shift reaction. This, Kondrat says, is due to the high copper surface area and good interaction between copper and zinc oxide.

Both methanol synthesis and the water–gas shift reaction are incredibly important for industry: methanol is a key chemical intermediate with an annual production of 100 million tonnes annually and water–gas shift catalysts have extensive applications for a number of upstream processes, such as the Haber–Bosch process.

The team is confident that the georgeite catalyst precursor can be commercialised. In fact the research was part-funded by industrial catalyst makers Johnson Matthey, who have filed a patent on the technology.

‘This is a beautiful piece of work,’ says Petra de Jongh who investigates catalysis at Utrecht University in the Netherlands. However, de Jongh thinks it’s far too early to talk about commercialisation. ‘They test the catalyst for methanol synthesis, but despite its initial higher activity it is very unstable compared to the commercial catalyst,’ she says.

Kondrat acknowledges that more work is needed. ‘Key to the industrial catalyst is the presence of a refractory oxide, such as alumina, to enhance mechanical and chemical stability. Methods of incorporating this phase into the georgeite precipitate are being worked on,’ he says. ‘Of course we also need to find a way of making georgeite without using expensive supercritical carbon dioxide and this is now one of our targets.’