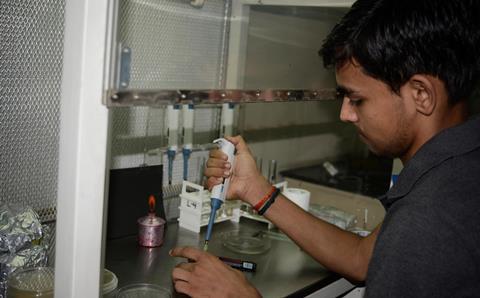 A recent explosion at a school laboratory in the eastern Indian state of Oddisha, which injured three students, has drawn attention to the poor laboratory facilities that students face in many of the country’s universities.

But these statistics mask the often poor laboratory infrastructure that most university students have to contend with, unless they attend one of the top-ranking institutions.

‘Undergraduate teaching chemistry laboratories, particularly in many state universities […] need modernisation,’ says Krishna Ganesh, professor of chemistry and director at the Indian Institute for Science Education and Research (IISER), Pune. ‘They are very poor from a safety perspective.’

Ganesh, who has been calling for more funding for chemistry research, says practical skills in chemistry suffer due to stretched budgets and neglect. ‘There are no or inadequate fume hoods to handle chemicals and students are not trained to wear safety glasses or gloves during experiments,’ he says. Many labs are also badly designed, without separate emergency exits. India urgently needs to standardise its lab designs, which should include ensuring that each chemistry department has a faculty in charge of safety and basic skills such as fire-fighting and first aid, Ganesh adds.

‘The safety facilities in most of the Indian Universities are not as good as in western countries,’ agrees Manoj Kumar Sharma, professor of chemistry at Guru Nanak Dev University, in the northern city of Amritsar. ‘Though most of the labs in India have some first aid kits for minor accidents [they] may not have quality fume hoods. Accidents take place when a student is not attentive while carrying out experiments, or sometimes students do not follow guidelines written on the chemicals.’

The root of the problem lies in the general neglect and cut in funds for higher education since the 1990s. H Surya Prakash Rao, professor of chemistry at Pondicherry University in southern India, notes that while chemistry labs in several colleges have been upgraded in the last couple of years due to an influx of m funds from the Ministry of Human Resource Development, the mere availability of laboratories is not enough. ‘There must be generous financial support for chemicals and specialised glassware,’ he says. Barring a few elite institutions, ‘the majority of Indian universities and colleges do not have the infrastructure for carrying out higher order research’.

The neglect of universities is reflected in students’ experimental skills, says Ganesh, which is often poor compared to theoretical knowledge. He observes that inadequate practical training ‘certainly’ affects both undergraduate and postgraduate students’ competence in research and industry jobs. ‘Most students have to be retrained in basic analytical and separation techniques and lab note record keeping,’ he says. ‘Imparting good laboratory skills and re-equipping them by first “undoing” their incorrect training […] takes both effort and time.’

Rao agrees, noting that university research is ‘crumbling due to insufficient funding and lack of accountability’, compounded by India’s famed bureaucracy. ‘Over the years, faculty staff are transformed into glorified clerks. They spend lots of time doing administrative jobs rather than spend time on teaching and research,’ he explains. The result is that students at Indian universities are not being adequately prepared for work industry, as they are in the US and Europe.

India urgently needs ‘modern labs, purposeful curricula with exciting experiments, industry participation in UG/PG courses in university (providing expertise and resources) for lab skill development, and emphasis on safety – practical and material hazards’, says Ganesh. He adds, however, that India is still managing to do well in chemistry research, despite the overall neglect of universities, ‘because of reasonably good course work in PhD courses and excellent job-oriented training in industries’.

Rao points out that the majority of researchers who are doing good research have been trained in top universities abroad. Students and teachers also keep themselves updated with research being carried out in rest of the world, which helps chemistry researchers fare well, adds Sharma. The consensus among academics is that it is not too late for India’s universities to make changes. The priorities must be freeing themselves of red tape, modernising lab facilities and overhauling their approach to teaching.