Pollution along our coastlines is worsened by chemical reactions that occur when emissions from ships and heavy industry combine with ocean air, US scientists have found.

Hans Osthoff of the University of Calgary, Canada, and colleagues, measured unexpectedly high levels of the pollutant nitryl chloride (ClNO2) in sea air, during a six week trip in a research vessel along the coastline of the Gulf of Mexico around Houston, Texas. The offending halogen breaks down into chlorine radicals that can produce ozone (O3) - a major component of smog.

The team believes that nitryl chloride’s unusually concentrated presence is due to the nitrogen oxides that are present in the exhaust plumes of ships and industrial emissions that drift out to sea from cities. NO2 and NO3 form dinitrogen pentoxide (N2O5), which previous studies have suggested reacts with chloride on the surface of sea salt aerosol particles to form nitryl chloride.

Using a chemical ionisation mass spectrometer to measure the nitryl chloride levels and a technique called cavity ring-down spectroscopy to study the precursor species dinitrogen pentoxide, the researchers found that both compounds built up in high concentrations at night. In the morning, the nitryl chloride decomposes in sunlight to NO2 and a reactive Cl radical - a powerful oxidant that can make ozone when it reacts with hydrocarbons. 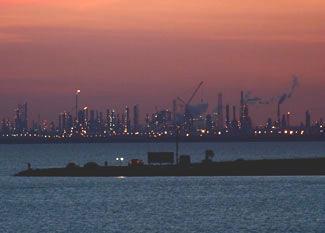 Sunset across Galveston Bay from the Texas City refinery complex, which is one of the largest petrochemical complexes in the region

The dinitrogen pentoxide precursor is only present in significant concentrations at night, because a compound that helps to form it, NO3, decomposes under sunlight. The scientists found that nitryl chloride, once formed, was also stable at night so that large concentrations - above 1 parts-per-billion - accumulated.

The fact that nitryl chloride breaks down after dawn is also critical, the researchers say. The chlorine radical is produced in the mornings at a time when there are few other sources of radicals, and so is responsible for ozone production starting earlier in the day.

’All of these effects combine to ultimately produce more ozone and reduce air quality,’ Osthoff says. He points out that a significant fraction of the world’s population lives close to oceans. ’The question remains as to how far inland nitryl chloride chemistry - and the associated increase in ambient ozone - extends.’