A new synthetic route that can produce dendrimers in kilogram quantities has been developed by scientists in the US. Abdellatif Chouai and Eric Simanek at Texas A&M University say their simple and reliable method produces material in commercial-scale quantities, potentially opening up new applications for these highly branched polymer structures, including medical therapeutics and diagnostics.

The team’s final structure, constructed in five steps, is an ’uncommitted intermediate’ - bearing twelve amine groups at the branch ends, the molecule is ready to have a variety of functional end groups attached. Such structures can be used as supports for catalysts, in drug and gene delivery, and as new materials and coatings. 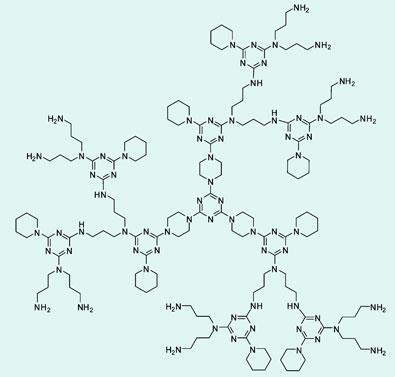 The ’uncommitted intermediate’ can be made in kilogram quantities

The key to Simanek’s large-scale route is its simplicity - which largely stems from the controllable reactivity of the triazine core - a six-membered ring of alternating nitrogen and carbon atoms. Functionalised with three chlorine atoms, displacing the first chlorine from the triazine can be done in minutes at 0?C, while displacing the third requires up to 24 hours of heating, meaning the structure can be built up selectively, in a minimal number of steps.

Simanek says he now plans to use the kilo of material he has in hand to investigate diagnostic and therapeutic applications for these structures.

’Dendrimer research is often seen as a bit esoteric - this synthesis should put these structures on industry’s radar, and show that these types of molecule are ready to be processed,’ says David Smith, who studies dendrimer synthesis at the University of York, UK. ’If you can do this synthesis in a university lab, you can definitely do it in an industrial process lab.’

Smith says that many other dendrimer syntheses could be scaled up in this way, though university researchers have been unwilling to expend the effort to do it.

A Chouai and E E Simanek,